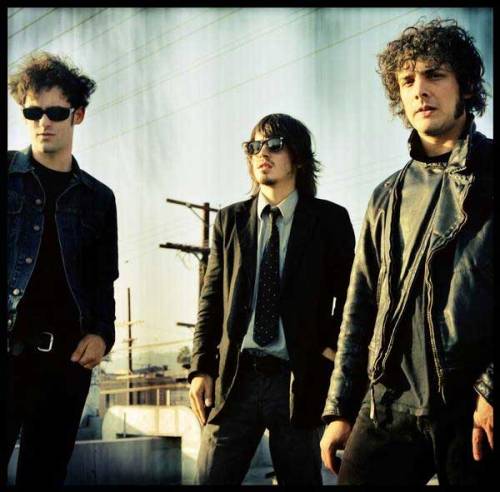 When I look back on this list I find it very satisfying because I still like almost everything on it. It’s the order that’s probably imperfect.

Looking back, putting Black Rebel Motorcycle Club‘s Howl at number one feels a bit like an act of style over substance. I mean, at the time they were super-cool, and still are to me, but Howl, the album, is one I rarely go back to despite having a number of great songs on it. In hindsight, this is probably a low top ten choice now.

Kid Dakota‘s The West Is The Future remains a brilliant, magnetic work for me. This dark narrative album takes you on a number of journeys — all articulated with thematic album art by Will Schaff — which leave you more than just a little bit unsettled. I’m not sure why Kid Dakota has remained so relatively unknown. Maybe it’s having recorded on small labels, maybe how intense the songs are (it’s clear to me most people don’t like intense… unless it’s by Bruce Springsteen or Thom Yorke), nonetheless, this album deserves to be heard. (Also, while writing this Sarah just reminded me that we once had a theory that this was Bill Priddle having secretly recorded a “crazy” album to free himself from his past.)

My love for Jason Molina’s music is well documented on this site and Magnolia Electric Co‘s What Comes After The Blues dutifully filled that spot in my heart for something new from him at the time. I know these songs off by heart from having listened to this album and the various live bootlegs of it non-stop, but it’s not the MEC/Songs: Ohia album I reach for first despite having songs I adore like “Hard To Love A Man,” “The Night Shift Lullaby” and “Northstar Blues.” Maybe it’s so much in me I don’t need to listen to it all the time.

Man, between The Raveonettes, BRMC, & MEC there was a lot of magic records happening at this time. I’ve definitely cooled on The Raveonettes recent recordings but this remains a pretty solid set.

If there’s anyone on this list that gets the Rodney Dangerfield no-respect treatment it’d be Mando Diao and their Hurricane Bar album. In fact, it wasn’t until writing this that I even realized I hadn’t imported the album into my iTunes. That’s probably a fair indicator that Hurricane Bar should be lower than it is, but something in the back of my head says no. I’m going to listen to it right now and consider it… annnd… alright, in a post-Strokes world it’s still pretty great. And because I haven’t listened to it in so long it’s like discovering a new album.

The Bees Free The Bees. The world is stupid for not knowing and loving this band and “Chicken Payback” is the best rock ‘n’ roll dance/party/Animal House song of the last 10 years. With a brilliant video that pre-dates “Gangnam Style” by years.

I still really like The Coral and feel they’ve made some amazing singles over the course of their discography, but I’m less invested in The Invisible Invasion than I used to be. I think perhaps my love of this album had something to do with grasping at the last wave of great Brit-pop and yearning for those days of Oasis, Blur, Supergrass and the like.

Dead Meadows Feathers. I don’t really feel this album any more. This one’s clearly a trend record that got lumped in-between BRMC and Raveonettes. I haven’t ripped it into my iTunes either and feel far less urgency to do so. I still like “At Her Open Door’ though.

Is Buck 65 still underground? He works at the CBC after all. And he was on a major label. That’s probably technically above-ground, but he still remains remarkably bold and avant. Secret House Against The World
is the album he made with Tortoise while in that I-hate-hip-hop period he had. The album has aged incredibly well and I still enjoy listening to it, but some of his future experiments were even more interesting to me, so this one suffers a bit not against its 2005 competition, but against Buck’s own discography.

When Ladytron first broke they were the shit with their coquette Depeche Mode thing. For The Witching Hour they dropped that act for a Sisters Of Mercy-girl goth electro thing. This hits a lot of my buttons, but upon relistening the songs aren’t quite there and if I had to redo this list this album would be at risk of being bumped.