Roger Waters Tour Kick-Off Proves How Important The Wall Is

Somewhere amidst the arrival of the giant inflatable “Mother,” the none-too-subtle animated film showing war planes carpet-bombing suburbs with Christian crosses, Islamic crescents and Jewish Stars of David, plus Shell and Mercedez-Benz logos, and the graffiti-style scrawl of “Big Brother Is Watching You” splayed across the literal giant wall that was rapidly being built to consume the full back 20 per cent of the Air Canada Centre, a nervous pang of realization hit me:

The Wall is really fucking important. And that concerns me because I have no idea what the future holds for this truly important work.

Roger Waters kicked off his massive 30th anniversary tour of The Wall last night in Toronto. It was the first time a full, proper production of the classic album and related stage show has happened since Waters’ former band Pink Floyd toured it in 1980.

True to his word, The Wall was done in its entirety with some incredible technological augmentation and, most importantly, a well-executed focus on bringing a “broader meaning” to what was originally Waters’ intensely personal album about the death of his father, his wife leaving him, abuse at school, and personal isolation.

In the 2010 version of The Wall, fallen 9/11 firefighters share equal tributes with Iraqi civilian casualties in a sweeping condemnation of capitalism, organized religion, politics and the sort of Apple i-everything universe we live in, all with a trust-no-one zeal that would make The X-Files‘ Fox Mulder blush for lack of commitment.

With Waters already deep into his 60s, the odds of him revisiting The Wall again in three more decades is mighty unlikely, despite how spry he looked on stage this night. And if this, like hushed rumours are to be believed, is the last time Waters will ever properly do The Wall, the question that hit me around the time “Goodbye Blue Sky” played became “Who will break down The Wall when he’s gone?”

It’s very clear from Waters’ massaging of the show that The Wall is something now very much bigger than its creator, and something that needs to not only be seen now, but well into the future as well.

Waters could easily be swapped out in a future Wall universe. He spent substantial portions of the show behind said Wall, or obscured in a Black Bloc-echoing black hoodie and jeans ensemble anyway. Licencing out The Wall to Eddie Vedder or Thom Yorke or PJ Harvey or someone else with character and artistic judgment would ensure that the revolutionary slogans that get projected onto the Wall during the show could get to live on.

When “Comfortably Numb” was played, in every section of the arena people were jumping out of their seats, holding their arms out with religious fervor and singing along. They could’ve been propelled by the numerous billowing pot clouds and the free-flowing ACC beer taps, but the song played out just as much a cautionary tale as a stoner anthem, so there was more to it than that. Likewise, “Run Like Hell,” which Waters introduced by saying, “Is there anyone here who’s weak? This song’s for you,” received a similar reaction.

What I was really witnessing in that arena last night was a sort of communing of sensitive souls, a meeting of people who think there’s something not quite right in the world. These were people who haven’t quite given up yet, who still want to break down that metaphorical Wall.

That experience isn’t one that should be limited to the attendees of the 100 or so shows that Waters intends to do on this tour. This new Wall is bigger than that. As a concert/theatre/spectacle Waters’ current edition of The Wall is something every self-respecting rock fan should witness. But what’s more important is that The Wall Rogers unveiled last night lives on for a long time.

This review was originally published September 16, 2010 via Chart Communications. 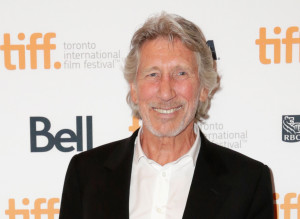 When Pink Floyd released their album The Wall some decades ago it was considered lead singer Roger Waters’ personal statement on loneliness and isolation.

In recent years he’s tried to re-imagine The Wall for a modern world and one part of that puzzle was creating a documentary film about his 2010 concert tour of the album.

Waters’ talked about the film for a premiere screening at TIFF 2014 and Sarah was there to cover it for Huffington Post Music Canada.

Imagine for a moment you’re in 1987 and listening to your favorite FM rock radio station. It’s playing Pink Floyd’s “Learning to Fly,” the band’s post-Roger Waters #1 comeback hit. As the hypnotic song coasts along, capturing its intended feeling of soaring through the air, suddenly at the 3:50 mark where David Gilmour’s memorable guitar solo is supposed to start, suddenly a beat drops and Gilmour instead throws down a rapid-fire verse about flying high. Pink Floyd… rapping.

It could have happened.

But it didn’t, despite super-producer Bob Ezrin’s efforts to introduce Pink Floyd to new sounds. At the time Ezrin, a co-writer of “Learning to Fly” and co-producer of the Floyd album A Momentary Lapse of Reason along with the band’s Gilmour, was deeply into this new form of music called rap. He even approached Gilmour about including some rap-like elements on the album.

“I became fascinated with it in the Afrika Bambaataa days,” Ezrin tells Spinner of his beats ‘n’ rhymes appreciation. “I’m an early adopter. I actually brought some in when we were doing A Momentary Lapse of Reason. I brought some in to David Gilmour’s thing going, ‘Boy, I think this stuff with a rock beat would be awesome.'”

While Ezrin’s visionary combination pre-dated the rise of rap-rock by more than half-a-decade, Gilmour was having none of it.

“He said, ‘Oh my God, that would be terrible,'” Ezrin recalls with a laugh. “He couldn’t believe it. He hated the idea.”

A Momentary Lapse of Reason was a top ten album around the world, and it did make extensive use of samples — mostly spoken word clips — so perhaps Gilmour took something out of that early rap after all. Though Gilmour probably made the right call considering the album’s success.

Perhaps lost in this whole fanciful adventure, however, is something unfamiliar to most rock ‘n’ roll liner note readers — Bob Ezrin, one of classic rock’s great producers and the man who built his reputation on game-changing albums like Pink Floyd’s The Wall, Alice Cooper’s Welcome to My Nightmare, KISS’ Destroyer and Lou Reed’s Berlin, is a huge rap fan. It’s a side to Ezrin’s work that’s often overshadowed, but it’s always been there.

“First of all it’s not really a secret,” says Ezrin, who’ll be one of the keynote celebrity interviews at Canadian Music Week in Toronto on Saturday, March 23. “It’s not what I’m noted for… I’m an old white guy. I’m not noted for that stuff, but then a lot of old white guys have been involved in urban music and been very important to it in that. Jimmy Iovine [Interscope, Beats by Dre co-founder] is an old white guy too, but without him the modern rap business would be entirely different.”

Ezrin’s rap roots actually run quite deep. At Nimbus, a music school he helps run, “Beats and Urban Music Production” is one of the marquee programs. He has a producer credit for helping out on Jay-Z’s 2004 documentary movie “Fade to Black,” and worked with Aceyalone’s Freestyle Fellowship on an underground internet radio channel years ago. He’s also helped out with Beat Kangz Electronics, who make “the best production work station for hip-hop producers in the world.”

Mostly, though, Ezrin says it’s about working with “artists,” whatever their stripe. One of his current faves is folk singer/poet/rapper K’naan, who Ezrin helped on the “Wavin’ Flag” Young Artists for Haiti charity single in 2010.

“I met him the first time when I saw him onstage at Live 8 where I produced the finale with Neil Young and all the different artists,” Ezrin starts. “But I was around for the whole day and I saw him onstage and basically went backstage immediately to meet him because I just thought he was so exciting and refreshing and pure and honest and beautiful. I just thought this was greatness, I saw greatness there. So we stayed friends over the years. We stayed in touch and we’ve finally had a chance to work on a few things. I did something on his current album and of course he and I did ‘Wavin’ Flag’ for Haiti, which was a great pleasure. And I consider him a friend and an artist and I’m always there to support in any way I can.”

“I love to work with those people who can honestly call themselves artists,” he says. “I haven’t been able to at every turn, but mostly I have.”

This story originally appeared March 19, 2013 on the Spinner Canada website.

UPDATE: Because Spinner is no longer available in Canada you can read the story HERE.

When you talk about guys who’ve been around in the music world, super-producer Bob Ezrin ranks right up there.

Ezrin’s responsible for producing mega-records like Pink Floyd‘s The Wall and Alice Cooper‘s Welcome To My Nightmare. One thing he didn’t do though, was get Pink Floyd to consider ways of incorporating rap into their music in the ’80s.

He told me as much in an interview for Spinner before an appearance at the recent Canadian Music Week. 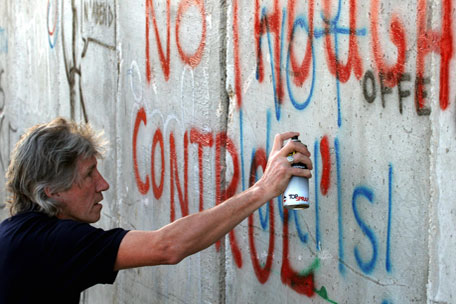 Some of the big stuff: Pink Floyd‘s The Wall, the movie, had its debut, that loser Beck was born, and Fatboy Slim had a big beach party.

To find out more things that made music history, click  here.