Beck’s breakout album Odelay turns 20 in the next couple days so I felt it was a good reason to take a trip down to Hot Take City about it.

Read the whole thing by clicking over to AUX TV here.

Station To Station Is No Festival Express

In 2013 a guy named Doug Aitken made a weird art-freak train trip across the country in which people like Thurston Moore, Cat Power and Beck showed up to take part in the ride.

These events were then turned into a movie called Station To Station.

Sarah reviewed Station To Station for Consequence Of Sound. 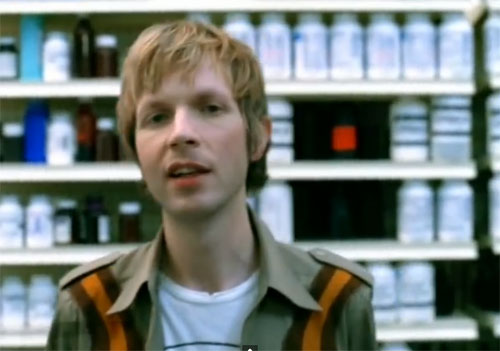 Beck from the Girl video

Back in ’95 every disaffected Gen-Xer and their mom were down with the sounds of Beck Hansen’s hit single “Loser” and the slacker rock king was a marquee attraction on that summer’s Lollapalooza tour.

What only a far smaller batch of ‘Palooza-goers would find out at those shows, was that Beck had more to him than just one fast-tiring alt.nation anthem. After his crowd-sating duties on the mainstage would end for the day, he’d magically reappear on the far smaller second stage to perform sometimes charming, sometimes funny, often weird solo acoustic songs to the folks who managed to find their way back there.

It was here that the greater public began to realize Beck’s broad musical vision. Sure he was good at goofball alternative hip-hop, but there was a genuine folk singer in there too. Then, in ’96, the explosive dance-rock masterpiece Odelay cemented his reputation as a shape-shifter, a musical chameleon.

The intervening years have seen a slow, sprawling record (Mutations), a sex-funk album (Midnite Vultures) and a broken-hearted folk affair (Sea Change). So when word got out that Beck was again collaborating with Odelay colleagues The Dust Brothers, tongues began to wag. Where were they going with this? Is this going to be Odelay II? Beck doesn’t characterize the new album Guero in those terms, but anyone who rocked the block to “Devil’s Haircut” will sense something familiar.

“Yeah, there’s a thing that happens,” starts Beck, explaining how things worked with The Dust Brothers. “A chemistry. When you have certain people around you, even if they’re just in the atmosphere different ideas pop out. And we’ve just been in touch all along. We’ve very much planned to do another record right after Odelay, but I got swept on a tour for almost three years. And by the time I finally landed on my feet it was three and a half years later, they were doing two or three movie soundtracks and one of them was producing an Eels record and another was mixing tracks for some other band.”

Working with The Dust Brothers again came easily. The songs were danceable, funky and rocking. And there were lots of them. Over 20 by Beck’s count, with 13 making it on Guero. On an album where things like car horns get looped into the songs, the concern became more about controlling the creativity than actually creating.

“I think where we worked last time [on some Midnite Vultures songs], we were very much ‘We don’t want to sound anything like Odelay.’ So the songs that don’t sound like Odelay at all are from that time. But I think at this point enough time has gone by where I went in and consciously decided I just wanted to let it sound how we sound when we make music together — not try to turn the wheel inside out and reinvent it three times. Just let it come out and not overthink it. Although there’s a couple songs where we definitely went into experimenting.

“I had a death metal thing I was doing for awhile,” concedes Beck. “We had a song called ‘Bury Your Halo Above The Void.’ But y’know, you can’t do everything on one record. I’m already pushing my luck as it is. It’s going to be my whole other period.”

Almost as much has been made of Jack White’s contribution to Guero as Beck’s reunion with The Dust Brothers. The main White Stripes’ part on the album turned out to be quite small on the record though.

“Yeah, he came by,” says Beck. “That was really early on… We got him to play bass on a song [‘Go It Alone’]. We messed around for about two days. But for what’s on the record, he played bass on a song. That’s it. And I wrote the lyrics, did the vocals and played guitar on it after he left. We basically just jammed with him playing bass and I was playing keyboards. And that’s the facts.”

The Jack White mention is one of the few moments where Beck shows anything less than absolute decorum. It’s not that he sounds angry, it’s more like he’s a touch wearied.

As it turns out, the whole personnel thing is a bit of a sore spot for him. The rapid-fire sonic transitions — from low-fi acoustic punk to slacker hip-pop to mega-honky funk and beyond — have left a trail of musician bodies at the side of the road.

“It’s hard for me because I’ve kept the band together for amounts of time, but people eventually go off and start their own bands or get married and move to New Jersey or whatever happens,” he says. “They don’t want to tour. So it’s like every time I go out it’s like starting over, which is great on one hand because you get a fresh perspective. But on the other hand, you’re sitting in a room learning the same songs you learned with 10 other bands the last 10 years.”

When you hear Beck say things like this, you realize that your Guero bedroom dance party isn’t going to last. If nothing else, Beck will remain committed to shifting his music around no matter who he’s playing with. In fact, there may be a time in the future when he just dumps the concept of contributing musicians entirely.

“I did a solo thing in Europe a year ago,” he says. “I was working on the one-man-band thing and now the technology has gotten to the place where it’s almost possible, so I was toying with the idea of just doing the whole thing myself… I might do that down the road. I have these different boxes where I can basically play and loop myself and then go to another instrument and then play with myself. So to speak. Jam with myself.”

This story originally appeared in the April 2005 issue of Chart Magazine, #165.

Some of the big stuff: Pink Floyd‘s The Wall, the movie, had its debut, that loser Beck was born, and Fatboy Slim had a big beach party.

To find out more things that made music history, click  here.