Roger Waters Tour Kick-Off Proves How Important The Wall Is 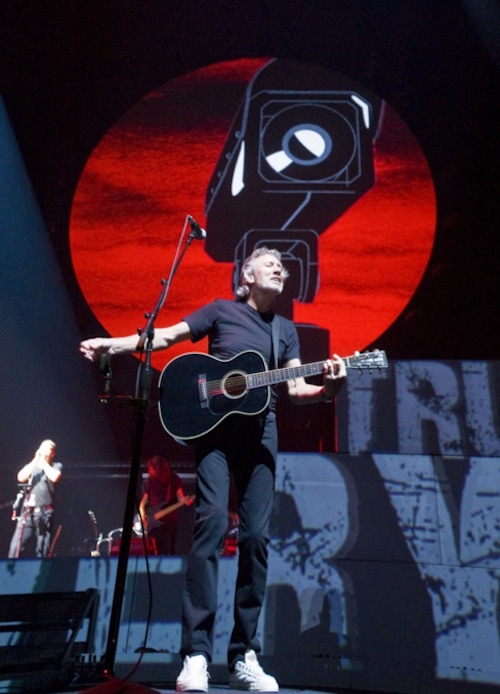 Somewhere amidst the arrival of the giant inflatable “Mother,” the none-too-subtle animated film showing war planes carpet-bombing suburbs with Christian crosses, Islamic crescents and Jewish Stars of David, plus Shell and Mercedez-Benz logos, and the graffiti-style scrawl of “Big Brother Is Watching You” splayed across the literal giant wall that was rapidly being built to consume the full back 20 per cent of the Air Canada Centre, a nervous pang of realization hit me:

The Wall is really fucking important. And that concerns me because I have no idea what the future holds for this truly important work.

Roger Waters kicked off his massive 30th anniversary tour of The Wall last night in Toronto. It was the first time a full, proper production of the classic album and related stage show has happened since Waters’ former band Pink Floyd toured it in 1980.

True to his word, The Wall was done in its entirety with some incredible technological augmentation and, most importantly, a well-executed focus on bringing a “broader meaning” to what was originally Waters’ intensely personal album about the death of his father, his wife leaving him, abuse at school, and personal isolation.

In the 2010 version of The Wall, fallen 9/11 firefighters share equal tributes with Iraqi civilian casualties in a sweeping condemnation of capitalism, organized religion, politics and the sort of Apple i-everything universe we live in, all with a trust-no-one zeal that would make The X-Files‘ Fox Mulder blush for lack of commitment.

With Waters already deep into his 60s, the odds of him revisiting The Wall again in three more decades is mighty unlikely, despite how spry he looked on stage this night. And if this, like hushed rumours are to be believed, is the last time Waters will ever properly do The Wall, the question that hit me around the time “Goodbye Blue Sky” played became “Who will break down The Wall when he’s gone?”

It’s very clear from Waters’ massaging of the show that The Wall is something now very much bigger than its creator, and something that needs to not only be seen now, but well into the future as well.

Waters could easily be swapped out in a future Wall universe. He spent substantial portions of the show behind said Wall, or obscured in a Black Bloc-echoing black hoodie and jeans ensemble anyway. Licencing out The Wall to Eddie Vedder or Thom Yorke or PJ Harvey or someone else with character and artistic judgment would ensure that the revolutionary slogans that get projected onto the Wall during the show could get to live on.

When “Comfortably Numb” was played, in every section of the arena people were jumping out of their seats, holding their arms out with religious fervor and singing along. They could’ve been propelled by the numerous billowing pot clouds and the free-flowing ACC beer taps, but the song played out just as much a cautionary tale as a stoner anthem, so there was more to it than that. Likewise, “Run Like Hell,” which Waters introduced by saying, “Is there anyone here who’s weak? This song’s for you,” received a similar reaction.

What I was really witnessing in that arena last night was a sort of communing of sensitive souls, a meeting of people who think there’s something not quite right in the world. These were people who haven’t quite given up yet, who still want to break down that metaphorical Wall.

That experience isn’t one that should be limited to the attendees of the 100 or so shows that Waters intends to do on this tour. This new Wall is bigger than that. As a concert/theatre/spectacle Waters’ current edition of The Wall is something every self-respecting rock fan should witness. But what’s more important is that The Wall Rogers unveiled last night lives on for a long time.

This review was originally published September 16, 2010 via Chart Communications.