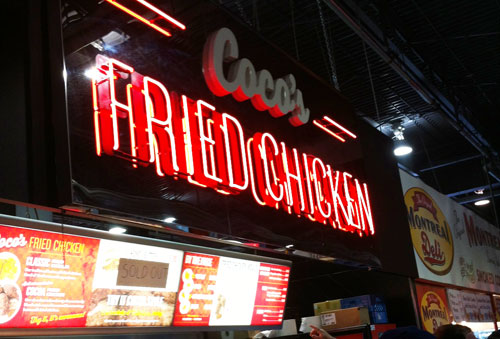 Having recently completed my fifth annual tour of the Canadian National Exhibition‘s weird fair food offerings I can say with a certain amount of humility that this one nearly broke me.

For the first time ever I went to the Ex on three separate occasions. And though each time was during the “after 5 p.m.” weekday special — so I wasn’t there for a full day — these three trips came on three consecutive days. And as shocking as it may seem, three straight days of eating carnie stunt food tends to cause a certain amount of physiological rebellion within the human body.

To find out how this all turned out, read below…

Quench Lemonade. I started out with a fountain lemonade (part of my ongoing Ex campaign to not drink pop). It was fine, standard lemonade with maybe 20% too much sugar. The mushed lemon half thrown in certainly added a nice touch. 5.7/10 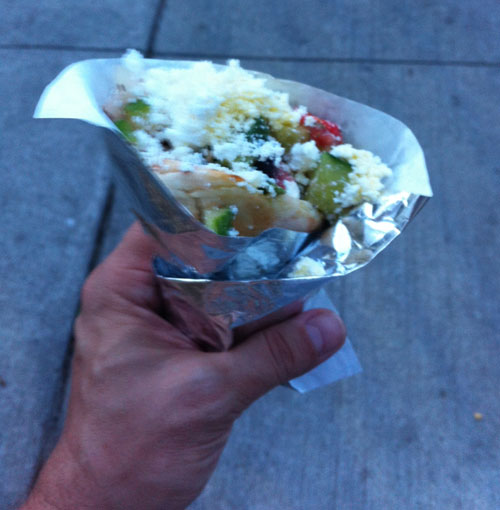 Just Cone It’s Olympus Cone. As a sucker for all forms of Greek food and as someone who decided he wanted to avoid the Bacon Nutella Pizza Cone, I went with the Olympus — a combination of tomatoes, cucumbers, green peppers, feta and olives — instead. Problem number one was that before I took a bite the biggest piece of feta fell off the top of the cone on to the ground. Burn. Then, when actually eating the thing the watery juices spilled on my hands. On top of that the cukes tasted old and gross. 4.9/10

Orange Sorbet. This was Sarah’s. I helped finish it off. Classic orange sorbet. 6.5/10

Note: This Sorbet came from Eative and their weird sci-fi dry ice gastro-something station. I didn’t get to see any of that stuff. I just ate the leavins. (Thanks, Tara.)

Water Bottle Refill Station. One of the great new institutions at the Ex is the prominent water bottle refill station right beside the eastern entrance of the Food Building. We actually refilled the lemonade cup multiple times to create lemon-bammed water. 8/10 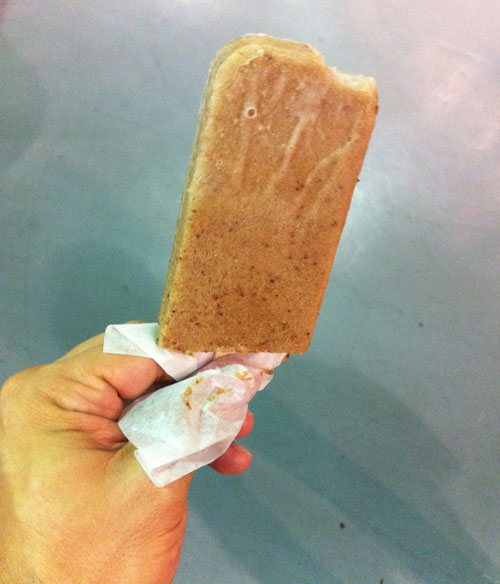 Miami Ice’s Monkey Junk. Being a little naive to wordplay sometimes, when I bought this I failed to realize that “Monkey Junk” meant “frozen banana smoothie popsicle.” Is that racist? Or has everything-is-racist sensitivity made me incapable of seeing it simply as “monkeys like bananas, this has bananas, therefore we’ll call it ‘Monkey Junk’?” Either way, by the time I got to the melty end of this it was kinda awful. 4.8/10

Fran’s Thanksgiving Turkey Waffle. Fran’s first year at the Ex was impressive. For stunt food the Thanksgiving turkey waffle was a solid meal. The portion size was huge and the service at the Fran’s booth was beautiful in its ruthless efficiency. About the only thing wrong with this meal — which was basically an open-face turkey sandwich with waffle instead of bread — was the cranberries. Nobody actually likes cranberries. They should die. 7.8/10

Second wave, Wednesday, August 27. One of my main goals on this night was to check out classic Can-Rockers April Wine. This cut into my eating time…

Reese Flurry. I’ve always loved soft serve ice cream and this was no different. That said, by the time you get to the bottom of this the remaining Reese’s Pieces are reasonably frozen and therefore not much fun to chew/bite. 6.8/10 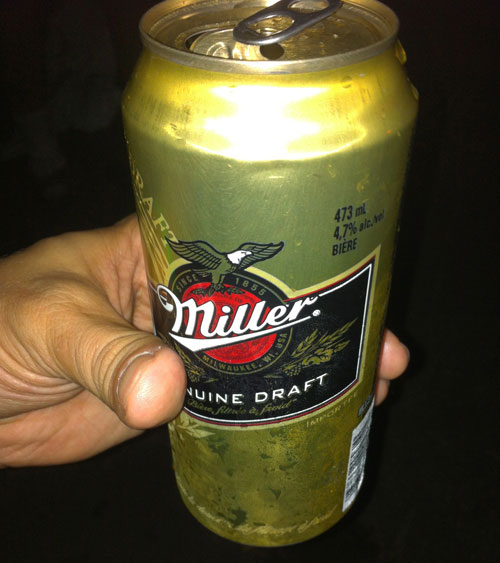 Miller Genuine Draft. I had two of these. They were normal beers from the Big Beer Industrial Complex. 6.2/10 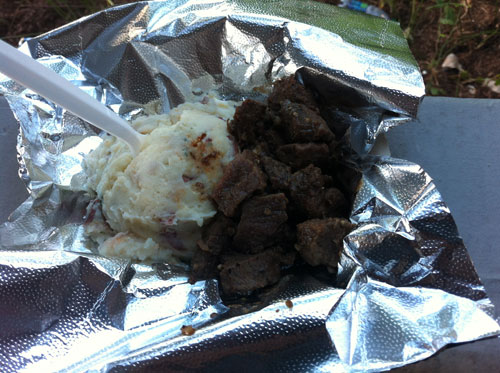 Iron Skillet Sirloin Tips and Garlic Mash Potatoes. These were very hit-the-spot tasty bits of steak ‘n’ potato. The best part being that the Iron Skillet folks weren’t scare of seasoning, which is a risk at some of these food stalls during the Ex. 7.9/10

El Gordo from Chunky Cheese Gourmet Grilled Cheese. Featuring Monterey Jack, sundried tomatoes, chicken breast pieces, salsa, chipotle spread and jalapeno peppers, this was one totally alright sandwich. It’s relative quality was a good salve because they also sold something called the Elvis sandwich — an abomination featuring peanut butter, cheese, bananas and some other crap — which I couldn’t bring myself to try. 7.5/10

Hula Girl Expresso’s Crobar. This was the croissant/chocolate bar hybrid that was one of this year’s alpha stunt foods. I’d consider it more “turnover” and less “croissant,” and there was nothing approaching the volume of a full chocolate bar in there (it was more like three squares of a Caramilk bar), but it was still quite tasty. 7.2/10

I wanted to try the Deep Fried Cheesecake, but it was sold out. So then I tried to get a Deep Fried Cola and that was sold out, too. Left with little else on the novelty food spectrum I went with… 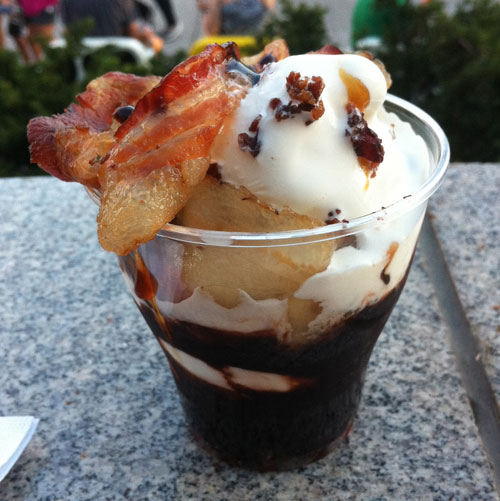 Bacon Nation Sundae. This is a normal soft serve ice cream sundae with caramel and chocolate. Except the bottom of the cup is filled with bacon bits and the garnish is two slices of bacon. The bacon slices weren’t so odd. After all, if you order something like a Grand Slam breakfast there’s often some collateral pancake syrup-to-bacon damage on those plates. But the bacon bits, man, that was… wrong. By the bottom of the cup it was just chocolate syrup and bacon bits in an unholy and inedible combination of the sort that’d make drinking fracking detritus seem relatively desirable. 3/10

Coco’s Fried Chicken Cocoa Chicken. Chocolate chicken? What the fuck? Well, sorry to disappoint you, but it basically tastes like normal fried chicken. With maybe a bit of cumin. There was nary a hint of chocolate beyond the appearance. Sidenote: The fries were really good… Coco’s has their fry game down. Sidenote #2: Do NOT get the “chocolate ketchup” dipping sauce. Imagine licking the toilets on the Carnival Triumph cruise ship… that’s what it tasted like.  Chicken 7.5/10, Fries 7.8/10, Chocolate Ketchup 1.2/10

Wild Child Kitchen’s Booster Juice. Having been thumped by the massive Cacao Chicken I needed a pick-me-up and for this I went to the hippies at Wild Child. I got something good from them last year so this year I decided to try the Booster Juice — beets, apples, carrots, ginger, lemon. The look of the Booster is great. Think “what True Blood prop juice must be made of,” but the actual drinking of the Booster? Let’s just say there’s such a thing as too much beet. And however much beet was in this drink was exactly too much beet. The slurry at the end of this — a combo of beet pulp and ginger — was undrinkable. 4/10

Special mention. The exact time required for the Wild Child Booster Juice to make its way through the entire human body is four hours. And when it does leave the human body it does so in spectacular, porcelain-staining, technicolour fashion.

Cherry Slushy. I got this to slink back into my comfort zone after the trauma of the Booster Juice. 5.9/10 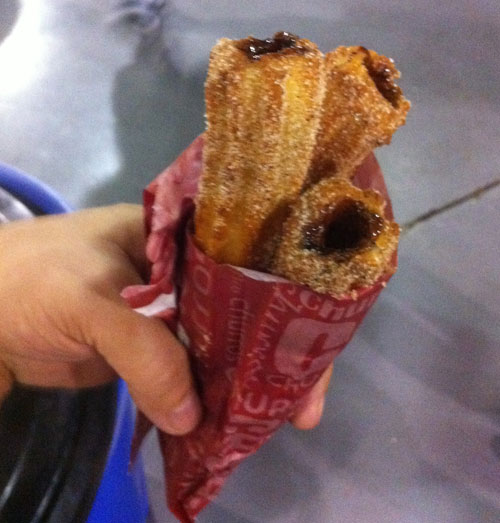 I Love Churros’ Chocolate Churros. A Spanish alternative to the classic sugar doughnut, these churros started out amazing. They were straight out of the deep fryer and their texture — a crispy, sugar-sprinkled exterior combined with a slightly doughy interior — made for magical mouthpleasures. Until I got to the bottom of the first one, that is. The chocolate syrup that had been pumped into the center of the churro had pooled at the bottom and become super-heated. So when I bit into it I got a gusher of scalding chocolate syrup in my mouth, essentially burning my tongue to the point where today I taste nothing. Also, after finishing these I almost randomly barfed without any notice or provocation. I blame that on the cumulative effects of the three days, not on the churros, though. 6/10

Things I ate at the CNE in 2016. Bug Bistro’s Bug Dog and Fran’s Blueberry Milkshake with a slice of real blueberry pie.

Things I ate at the CNE in 2015. Including Frosted Flakes Chicken On A Stick and The S&M Burger.

Things I ate at the C.N.E. in 2013. Including Nutella Jalapeno Poppers and the S’more Dog.

Things I ate at the C.N.E. in 2012. Including the Chocolate Eclair Dog and Bacon Nation Nutella BBBLT.

Things I ate at the C.N.E. in 2011. Including the Krispy Kreme Hamburger and Deep Fried Twix.

Filed under Food, Recollections, The Misadventures Of