When Prince passed away on April 21, 2016 it not only left a giant purple hole in the hearts of music fans worldwide, it also launched a fascinating new mystery: What’s going to happen with Prince’s vault?

It’s been long known to Prince fans and music insiders that The Purple One maintained a massive secretive vault containing copious amounts of unreleased music, movies, videos, and as we’re coming to learn, memorabilia, and items of personal significance.

In the absence of a formal will, Bremer Trust, the executors of Prince’s estate, had to drill into Prince’s vault so they could properly assess its content. Though Bremer has not made its findings public, lists containing some of the items in the vault have already been leaking to the media.

Though many of these items are already familiar to Prince devotees, there’s a fascinating array of previously unknown recordings and projects that span Prince’s career and interests.

Here’s list of what we know the vault contains, so far:

The Rebels — A collection of rock songs done with members of The Time in 1979.

The Second Coming — Documentary film and live album from 1982.

Apollonia 6 film — A cinematic attempt to do for Apollonia 6 what Purple Rain did for Prince.

Prince and the Revolution: Dream Factory — Double LP project from 1986.

Late Night Train — Shelved project with Sheena Easton who was contemplating a Rated-R image change at the time.

Under The Apple Tree — Script for Under The Cherry Moon sequel.

“Take A Bite Of My Apple” — From Under The Apple Tree soundtrack. Sung by Kristen Scott Thomas.

The Tora Tora Experience — Tora Tora was a pseudonym Prince used to create some unreleased music in 1994.

“Live” — Multiple disc live album set featuring songs recorded on tours between 1987 and 1993: the Sign o’ the Times Tour, the Lovesexy Tour, the Nude Tour, the Diamonds and Pearls Tour, and the Act I and Act II.

Custom BMX Motocross Bicycle Racing gloves — All purple, with the O(+>) symbol on each finger.

The Vault: Volumes I, II, and III — This project is believed to include parts of the Chaos and Disorder and The Vault… Old Friends 4 Sale albums as well as a mysterious third record.

Robin — Concept album dedicated to Robin to coincide with the Batman And Robin film release.

Prince and the Revolution: Roadhouse Garden — Album from 1998 which remains unreleased likely due to Prince feuding with The Revolution over money.

New Funk Sampling Series — Seven-CD box set full of samples and loops designed to be licensed and royalty free to whoever purchased it.

A Celebration — Re-recordings of past hits from 2001.

When 2 R in Love: The Ballads of Prince — A collection of slow jams and romantic ballads.

High — Unreleased album from 2000 with contributions from Angie Stone.

Joker 2 — A collection of songs written for Jared Leto, including the focus track “Thirsty.”

This piece was originally published via AUX TV on May 3, 2016. 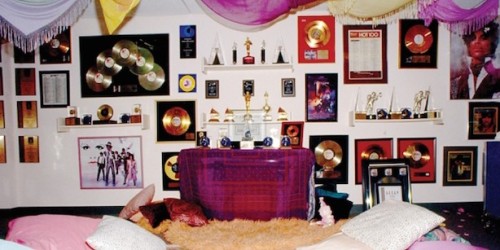 The executors of Prince’s estate are currently working on opening and investigating the vault to catalogue its contents.

I wrote about what the Prince vault may contain for AUX TV.

Because AUX TV is RIP, this story can now be found HERE.