Legendary alt.rockers the Pixies played a secret show at the tiny Casbah in Hamilton, Ont. on Friday night.

The band were using the show as a tune-up for their next-day performance at Virgin Festival Ontario in Toronto, as well as to test-drive what may be the setlist for the upcoming tour celebrating the 20th anniversary of their Doolittle album.

Indeed, there was nothing from the Bossanova album played all night as the Pixies focused on signature Doolittle tracks like “Here Comes Your Man,” “Wave Of Mutilation,” “Debaser” and “Monkey Gone To Heaven” in addition to “Where Is My Mind” and “Gigantic” from Surfer Rosa. In another Doolittle timeline moment, Frank Black and company also dusted off a cover of Neil Young’s “Winterlong.” The band originally covered the song two decades ago for The Bridge — A Tribute To Neil Young compilation.

The Pixies’ appearance was a closely guarded secret right up until the moment they hit the stage. In the weeks prior to the event local music industry insiders were invited to what was alternately being billed as an album release showcase for Spirits, the new ’80s-tastic sounding band fronted by Brad Germain of The Marble Index, and/or as a launch party for the International Tour & Tech Academy.

Organizers were only suggesting that “an international touring band — not Canadian — will also be on the bill,” and right up until Black, Kim Deal, David Lovering and Joey Santiago appeared, there was belief among pockets of Casbah attendees that they were about to see Franz Ferdinand, who were also playing VFest the next day.

Anyone with a calendar and a good grasp of Frank Black lore would have guessed the Pixies, though. Black has a long history with the steeltown an hour south of Toronto. Sonic Unyon, the distributor for many of his solo ventures, is based in the city, he’s used the Hamilton as a rehearsal base in the past, and he’s also played secret shows at Sonic Unyon’s headquarters throughout the years.

For their part, Spirits seemed less intimidated than excited at the daunting prospect of following the Pixies. Even the lengthy almost hour-long changeover required to move the Pixies stadium show-worthy stacks of Marshall amps and other gear didn’t dampen the band’s enthusiasm as they flung themselves into songs from their self-titled debut which is set for a Sept. 29 release.

The show was also a good one for trainspotting some of Hammertown’s music celebs. Mingling amongst the 200 or so in attendance were Finger Eleven’s Scott Anderson, Gaz Whelan from Happy Mondays, members of Junior Boys, Sons Of Butcher, Dylan Hudecki (Cowlick, ex-By Divine Right) and at least four dudes who looked like Dan Snaith of Caribou.

This story was originally published August 30, 2009 via Chart Communications.

If you’ve been paying attention at all you may have figured out the Arkells have become one of the biggest rock bands in Canada in the last year or so.

They seem to understand that with this great new power they’ve also got great new responsibility.

When they played their big hometown stadium show this past June in Hamilton they also used it as an opportunity to raise funds for Refuge Hamilton Centre for Newcomer Health.

I spoke to lead singer Max Kerman about the reasons why they did this for Samaritanmag.

To read the piece go here. 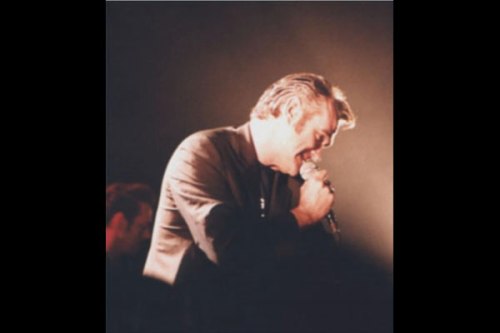 “Is It Really So Strange?”

“Last Night I Dreamt That Somebody Loved Me.”

“Shoplifters Of The World Unite.”

Five Smiths songs. Betcha you’re kicking yourself for not making the drive to Hamilton now.

After dropping so many of the “oldies” as Mozzer so quaintly referred to them, let’s face it, any sort of objective criticism went out the window. And there were more than a few things which could have flown back in Morrissey’s face this night: He chose to play the steeltown of Hamilton rather than Toronto, a mere hour away (but now that I think about it, Moz has always had a strange working-class fixation despite his pure bourgeois ponce). He has no record label, largely due to the fact his last record, Maladjusted, was truly horrible. And, at 40 or so, Moz isn’t exactly the winsome young turk that made sexually ambiguous hearts flutter back in The Smiths days.

Still, by about the third song in, all of the potential black marks against this show were rendered moot, showing just what kind of performance Stephen Patrick could put on.

Moz started out slowly, with a three-pack of mid-tempo numbers that included “Ouija Board, Ouija Board” and “I Am Hated For Loving.” They were warmly received and prompted the obligatory surge of Moz diehards to the front of the stage, which was surprisingly easy considering that Hamilton Place is a soft-seat venue (and yes, everybody was standing throughout the show, something I’m not sure would have happened if Moz had played in the more dour surroundings of Massey Hall in Toronto).

Things really got going, however, when the festivities were sped up with “Billy Budd” and “November Spawned A Monster.” By this time Moz had launched his first sweaty t-shirt into the crowd and had his first stage-invader.

Throughout it all, Moz was peppering the crowd with witty banter, coy lines and even some jokes. He was laughing and jovial, and it truly was a departure from his customary tortured writhing. That injection of humour just may have been what helped get him over this night as well. We know Morrissey’s days of playing to 12,000 at Maple Leaf Gardens are over, and you have to admit he’s haggaring somewhat. But he’s smart enough to know that if he’s getting his people to not only travel an hour from Toronto to see him, but drop $40 for the privilege of doing so, he better do more than leave them stewing in a nostalgic fog recalling how that special boy or girl broke their heart.

I must say though, that nostalgic fog felt pretty good when the band broke into Smiths’ classic “Half A Person.” Like a bolt of electricity, this instantly sent a shock through the crowd. At this point, there were no more questions about Moz’s performance or appearance. Everybody was in the palm of his hand. From there, the crowd lapped up “Hairdresser On Fire” (turned into a faux rip on London, Ontario) and “Boxers” before a tempo change once again with “Now My Heart Is Full.”

With the crowd firmly hooked, the stagelights turned a blaring red and Moz entered into “Meat Is Murder.” If the first half of the show was about a friendlier, Moz-as-entertainer vibe, “Meat Is Murder” brought back all the morbid loathing that drew all those lonely-yet-haughty-types to The Smiths so long ago in the first place. Wrenching and poignant, it would have made a fine conclusion to the evening, except there was still more to come.

A crowd-stoking “Is It Really So Strange?” and “Alma Matter” closed off the regularly scheduled program for the evening. But when Moz and the boys re-emerged at the encore to perform “Last Night I Dreamt That Somebody Loved Me” and “Shoplifters Of The World Unite,” the crowd broke into their biggest singalong of the whole evening in addition to prompting a renewed rush of stage invaders.

It was something of an abrupt end considering Moz had only just set the assembled masses into a frenzy, but you’re not going to hear much complaining. About the only thing that could have made the night better would have been a double shot of “Pretty Girls Make Graves” and “Panic.” And besides, how many times are you ever going to hear the Moz play five Smiths songs again?

This review was originally published February 18, 2000 via Chart Communications.

Oh What a Feebling: A CanRock Short Story Collection, Part 7 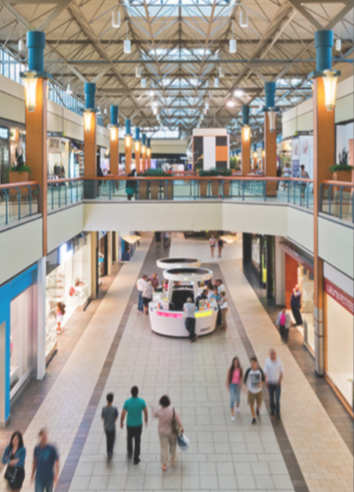 Fire In The Head

Between the fifth and sixth grade I changed schools and entered a full time gifted program. Ostensibly, I did this because I was such a bloody genius and I needed more of a challenge than my local school and teachers could offer, but that was maybe one per cent of the reasoning behind my final decision. In reality, I was being viciously bullied and I needed to get the fuck out.

As a result of this, I adopted a scorched earth approach to everything that I thought might have made me a target in the past. I started wearing jeans because someone once made fun of my stirrup pants (oh, the early ‘90s) at the old school and I thought maybe that was part of the problem. And I completely turned my back on all things science fiction-related because my Dune and Star Trek love really hadn’t gone over well at all.

While I missed comfortable pants, I actually found it easy enough quit sci-fi cold turkey. Whatever enjoyment I’d received from the genre was too heavily weighted with baggage. Space and science just felt like victimization. I felt vaguely sick when I even tried to watch or read that shit. And I soon fell in love with indie rock and had no room for any other entertainment in my life, anyway, so it was a relatively painless break.

In grade eight, our teacher included a science fiction unit in our language arts studies. The majority of the class – male geeks who were allowed to stay in at recess to play D&D – were thrilled. The brilliant burnouts and academic overachievers were either apathetic or somewhat game.

I was viciously disappointed in our naive teacher for even suggesting such a thing. Surely she could tell how vulnerable we were as a small class of gifties in a normal school. Why on earth would she bait all of those potential bullies by making us visibly read and engage with science fiction?

When it came time to write our own sci-fi stories I did the only thing in my power to protect myself: I sort of made it about indie rock. And, um, Hamilton, Ontario.

I was really, really, really, really into the Killjoys and the Sonic Unyon bands at the time and their hometown had taken on almost mythic proportions in my mind. I loved Hamilton beyond all rationality. Like, I used to tag along on my family’s (strangely frequent, in retrospect) road trips to the Lime Ridge Mall just so I could be in Hamilton.

Which is how I ended up writing a (not terrible?) science fiction short story about people with bright hair getting killed and committing suicide a lot set at the Lime Ridge Mall and named after the band Smoother to defend my coolness.

END_OF_DOCUMENT_TOKEN_TO_BE_REPLACED 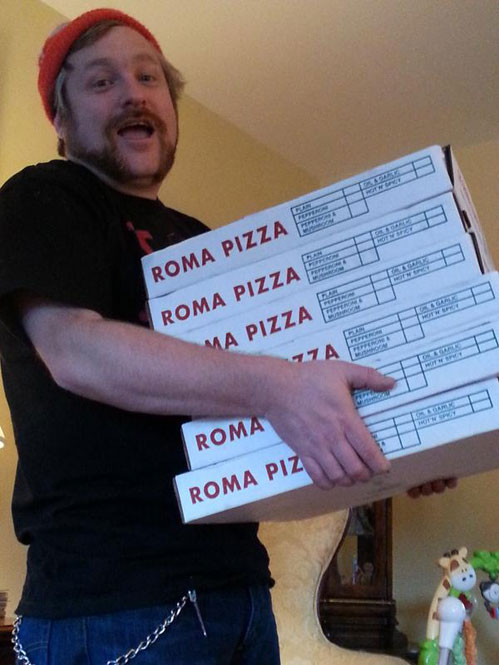 BA Johnston in his natural state. Photo cribbed from his Twitter.

The haters, of which there were many (including enough Polaris jurors that Shit Sucks failed to make the 10 album Polaris Short List), viewed Johnston’s album as schtick, an unfunny musical comedy by a pizza-obsessed loser.

The lovers, though, saw a lot more to Shit Sucks. To these people Johnston was and is funny. They created a Twitter movement on his behalf. They even enlisted the support of Hitler. For them, Johnston’s confessional songs poked at that same wounded, fragile humanity that made Rodney Dangerfield forever question why he couldn’t get no respect.

There is, however, an overlooked third faction in the Shit Sucks debate — foodies. See, in his own way, Johnston is a food connoisseur, a man who has immortalized t-bone steaks, garlic fingers, english muffins and western sandwiches in song, and who dreams of having a deep fryer in his bedroom.

For these people Shit Sucks reveals many unexpected and often melted cheese-laden delights. We put on our best chili boots and decided to track all the food references on BA Johnston’s Shit Sucks album. The results were… delicious:

“I Remember Skinny Jeans The Last Time Around”
* Foodland

“Nuke Toronto”
* nothing good to eat