The late Elvis Presley had a not-so-secret obsession with martial arts.

A lot of that had to do with The King’s relationship to kenpo master Ed Parker.

Sarah explored a bit of this in a post for Asian World of Martial Arts.

Elvis Presley’s enthusiasm for karate is pretty well-known, but the King also had a flirtation with another fighting art — boxing.

Sarah tracked some of his pugilistic adventures for Fightland.

The Karate King: A Beginner’s Guide To Elvis Presley And Martial Arts

The king of rock ‘n’ roll Elvis Presley also happened to be a karate obsessive.

Lest anyone forget this fascinating footnote in music/culture history, Sarah created a beginner’s guide to Elvis’ martial arts obsession for Fightland.

For anyone who had floppy hair and thinks they’re British it was a week to celebrate the debut of Oasis‘ Definitely Maybe album. To guitar geeks it was the week Stevie Ray Vaughan died. And to Elvis fans it was the week that someone almost successfully dug up and stole his dead body.

To find out more things that made music history, click here.

Concert Censorship: A Brief History Of ‘The Man’ Trying To Shut Down The Rock 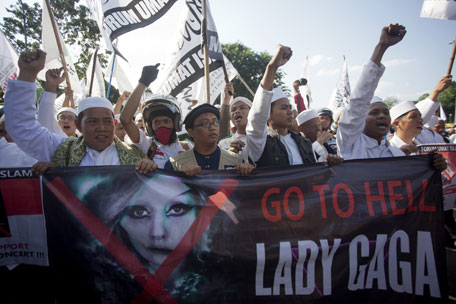 On any given day, in any town or city, anywhere in the world, there’s probably some crackdown/protest/sinister bullshit happening that’s attempting to prevent people from rockin’ and dancin’.

Basically, the people behind these crackdowns hate music and they hate life and they’re assholes.

Anyway, in lieu of the latest round of anti-Lady Gaga protests in the Philippines and such, Sarah was tasked to find other examples of The Man cracking down on rock ‘n’ roll.

It turns out there were no shortage of examples, from Elvis Presley to Eminem to The Beatles to you name it. Basically, the government is afraid of musicians.

To read about this story, head over to Spinner by clicking here.