Sarah, the half of Team Risky Fuel who doesn’t think such movies are stupid, calls the film “gorgeous, often delightful, and quite satisfying.”

To read her review of it head over to Consequence Of Sound by clicking here. 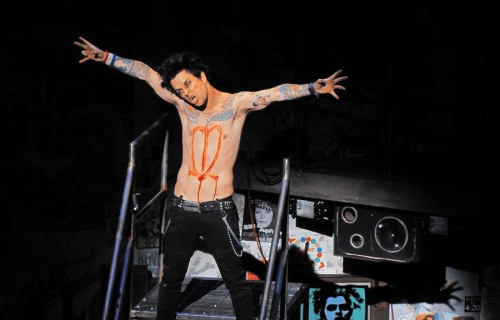 Scenes From American Idiot, The Musical

There’s been a lot of talk in the Risky Fuel household over the years about things like Pippin, Cabaret, and Hair. All of it by Sarah.

She’s moderately obsessed with musicals and has crafted a number of fake ones in her head. It would seem the enablers at AUX TV thought it would be cute to set her loose and reveal some of these ideas. The result: storylines for musicals about Bon Jovi, Arcade Fire, Rush, The Dandy Warhols and Brian Jonestown Massacre, Joel Plaskett, and the topper, a gay love triangle called Heavy Metal: The Musical set to Judas Priest songs.

You can read all about said musicals by clicking here.

Team Risky Fuel was so full of existential angst after checking out the Canadian debut of Green Day’s American Idiot musical that we had to dig a little deeper.

So Sarah tracked down Jake Epstein, one of American Idiot’s main performers, to get the lowdown on what it’s like channeling Billie Joe Armstrong every day. Along the way Jake, who played Craig Manning on cult series Degrassi: The Next Generation, also dished on his former castmate Drake, Glee, and subversive musical Spring Awakening.

You can read the story at Spinner by clicking here.

Aaron and I went to the opening of American Idiot at the Toronto
Centre For The Arts on Thursday night. He went out of a slightly
morbid curiosity. I went because I was reared on alternative rock and
show tunes in almost equal measure, and the show seemed like it was
made especially for me.

As a rocker, I was more amused than satisfied with the production. But
as a Broadway baby, I was completely entranced.

The 90 minute musical based on Green Day’s 2004 concept album of
the same name isn’t a perfect marriage of rock ’n’ roll and musicals,
but it is a very good musical that is fueled by the spirit of rock.
Much like Spring Awakening (director Michael Mayer’s other
groundbreaking show that infused popular music with a more traditional
theatre structure) used pop to express sexual frustration and coming
of age melancholy, Idiot harnesses Green Day’s fury, frustration and
passion to tell the story of a trio of friends facing a post-9/11
world.

The plot is bare bones to the point of abstraction (it’s really not
much more complex than the high concept pitch I tossed out two
paragraphs ago) but Idiot is more about feeling than story. And
everything from the choreography, the balls-out performances by the
cast, and the brilliant stage design really nails that essence. It’s
not quite as in-your-face as an actual rock concert, but American
Idiot is one of the most visceral musicals I’ve ever seen – although
experienced is probably a more accurate description.

American Idiot runs until January 15 at the Toronto Centre For The Arts
The cast will also be performing as part of CityTV’s New Year’s Eve
Festivities tonight.