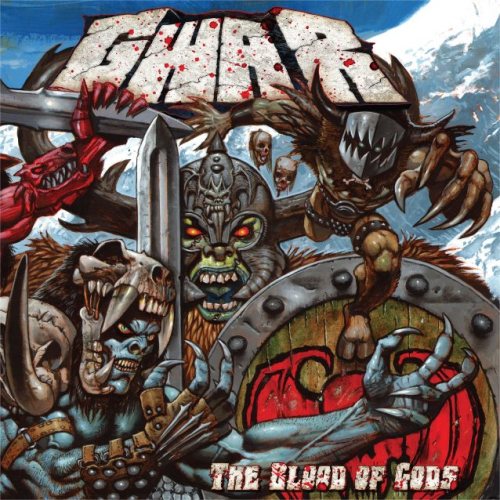 GWAR – The Blood Of Gods

The last thing I expected to find when I listened to a new GWAR album in 2017 was… humanity. And yet, here we are. In an age where Insane Clown Posse have become civil rights activists, where Jimmy Kimmel, a person’s whose old show used to do a side-business selling Girls on Trampolines DVDs, is now our nightly voice of the resistance, and where Eminem has become a woke protest singer, GWAR’s enlightenment (of a sort) doesn’t feel so weird.

To be fair, you still have to squint a fair amount to find said humanity from these alien invader/heavy metal cartoon warriors. After all, there’s still lots of in-the-pocket GWAR to be found on The Blood Of Gods. “I’ll Be Your Monster” is like a flip on Alice Cooper shock rock with an actual hint of menace, “Viking Death Machine” is a free wheel burnin’ highway anthem, and the band’s cover of AC/DC’s “If You Want Blood (You Got It)” is so obvious it’s stunning they hadn’t thought to do it before now.

But then there’s the anti-overpopulation screed “Swarm,” the let’s-kill-the-president shanty “El Presidente” and the cathartically universal “Fuck This Place.” If sometimes feeling like our need to conquer and explore has irreparably messed up the planet, or worrying that the world is teetering on the brink of destruction because of a mentally damaged world leader aren’t absolutely human concerns then I don’t know what are. Throw in “Phantom Limb,” a fitting tribute to deceased former band leader Oderus Urungus, and these songs are a fair argument for a surprisingly tender GWAR. At least in their way.

Either that, or the world is going to such shit that I’ve started to look to GWAR for morality tales. In which case, fuck this place.

It was a super-bummer morning today when I woke up and found out that Dave Brockie, the earthbound alter-ego for Gwar lead singer Oderus Urungus had died.

I got to interview Oderus once for Chart Magazine in 1999 or so when they put out their We Kill Everything album. To the best I can tell the story was purged from the internet at some point. And I couldn’t find it looking through old back issues of the magazine either, so it may not have even made it in print either (presumably because the interview was too offensive to go on newsstand).

What’s with all the Mexican Inca crap [We Kill Everything‘s cover art]?
Oh I don’t know. You’ll have to ask the art department. I don’t design that crap.

I noticed you’ve got a song on the new record called “Babyraper,” we’ve got an intern who’s pregnant and really sassy. What should we do with her?
Rape her. Rape the child before its born. You gotta find someone with a long enough dick. First of all you gotta punch her in her pregnant fucking belly, until the kid is positioned with its butthole at the end of her pussy. Then you gotta get a big long penis. And if you can’t fuck with a penis, then fuck her with your leg. Fucking toe-fuck the kid. Whatever works, I dunno, ram a fire hydrant up her ass. You go with it baby, you go with it.

What’s the deal with the songs “Fishfuck” and “Fuckin’ An Animal”?
There weren’t enough songs about bestial butt sex on the last record. A lot of fans complained about it, they’re like, “Oderous, why aren’t there more songs about beastial butt sex?” I was like, “Geesh, you’re right. Oh, my gosh. I’m sorry. I’m sorry.”

You guys must be real popular at petting zoos?
We’re banned. Universally banned.

You mention muskellunge, “got a dick like a muskellunge.” Your fans don’t know what the hell a muskellunge is?
I don’t care. I don’t pander down to the legions of retarded fans who call Gwar their gods. Hey baby, no one knows what a Moa-Moa is either. So I’m trying to educate people. My fans are gonna read that and they’re gonna go, “What the fuck is a Muskellunge?” And they’re gonna go look in the Encyclopedia of Fishes, or maybe go to Borders, and they’ll look at it on the rack, y’know, and go, “Oh muskellunge, what an ugly fuckin’ fish!”

How many of your fans do you think fish?
Oh, I don’t know, I mean I’ve never seen a fishing tournament. I’ve never seen a Gwar-sponsored bass boat. It would be great though. I would recommission the Iowa and drop depth charges to capture the fuckin’ fish. It would be spectacular. A lot of things would be spectacular but we’ll never get to do them because people will be terrified.

I was thinking about the song “Penile Drip.” Shouldn’t you get that checked out?
No. Where I come from penile drip is a measure of your masculinity. I mean, you want to cultivate social diseases. Make ’em bigger, make ’em better. Everyone’s got a normal looking dick. I want warts, boils, puboils, running sores, pus dripping off the end. That’s what I want. What I get. That’s what I have.

Have you seen that new Star Wars trailer?
Yeah I saw it.

Those are things that deserve kickin’.
They better not be in this fucking movie.

Why don’t you beat the shit outta some of them?
They don’t even deserve to be in a Gwar show the things are so fucking pathetic. Return Of The Jedi made me so fucking mad, and now everybody’s getting so fucking into it — all these fat, balding, double-chined, comic book-collecting morons — I fucking hate it already.

What about when Darth Vader turns good at the end?
…And when they take his hat off, he’s not even fucked up lookin’?! He looked O.K., I mean there was some fucked up shit around the edges [of his face], but c’mon! He should have been way more fucked up!

Where would Chewy fit in Gwar?
Anywhere he wants to.

None of them pretty.
No, not at all. Slymenstra crawlin’ up inside of him and , ugghh God! Yuck, next question.

What about Slymenstra versus Darth Vader?
Oh, I don’t know, I don’t want to talk about Star Wars anymore.