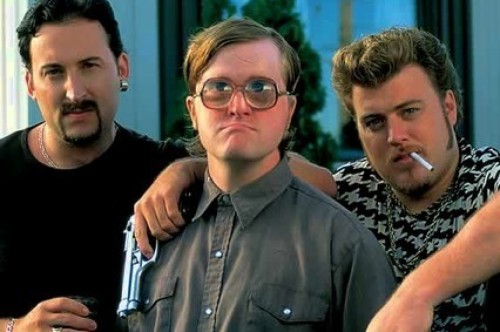 In anticipation of the release of the new Tragically Hip album, In Between Evolution, and the Hip’s big Canada Day Concert at Toronto’s Molson Amphitheatre, ChartAttack is declaring June 25 – 30 ” Tragically Hip Week.”

For the next three news days, we’ll be posting stories culled from a recent interview with Hip singer Gord Downie. Here’s the second installment:

The Tragically Hip may have a new record called In Between Evolution coming out and a marquee Canada Day show, but lead singer Gord Downie has something more important to talk about — the Trailer Park Boys. The conversation begins innocently enough, revolving around the mention that the new record is littered with references to gunsmoke and bullets.

“Yeah,” confirms Downie, “and swearing. No nudity, though. Unlike past records.”

Which means that, despite its dangerously high rocking level, church-goers can probably still dig the record.

“That’s right. So I don’t get the full Trailer Park Boys warning — dope references, nudity,” says Downie, before bursting forth with a most entertaining tangent. “Well, that’s the thing actually. They [the Trailer Park Boys] are trying to make a movie. I was saying to [producer Mike] Clattenburg, ‘You get to open up a whole new area of offensiveness.’ Well, not offensive. I think it’s beautiful. Most people love it. It’s great.”

For those of you still willfully oblivious, Trailer Park Boys is a Showcase/BBC America mockumentary that follows Ricky, Bubbles and Julian, three petty criminals whose drunk/stoned shenanigans end up causing some form of televised hilarity each week. Canada’s elite level rockers have all but deified the show’s protagonists in recent years. Alex Lifeson of Rush was kidnapped on one episode of the show and on another crooner Rita McNeil was forced to harvest marijuana for the Boys. The Boys have also appeared on tour with Our Lady Peace and have been featured in The Hip’s “The Darkest One” video. Also, thick-glassed Bubbles real-life alter-ego used to play in a genuine East Coast rock band whose name starts with an S, ends with an X, and has seven letters.

One of the Boys’ main adversaries is the character of trailer park supervisor Jim Lahey, a drunkard whose gift for shit metaphor is unparalleled. The mere mention of Lahey’s name sends Downie into a giddy line-for-line recall session.

“‘We’re heading into a full-fledged shiticane!’ ‘Pull up the jib, Randy, because it’s about to be covered in shit.’ But the ones they discard… Mike’ll tell ya. The one’s they’ve come up with, it fuckin’ hurts you laugh so much,” Downie enthuses. “And we haven’t even talked about J-Roc [a white hip-hopper played by Jonovision‘s Jonathan Torrence]. I don’t know. They’re just so funny.”

Beyond the dope humour and hijinx though, Downie figures there’s another reason why folks love the Trailer Park Boys.

“I think, more than the broad, sweeping idea of Canadian, we tend to relate to the people we grew up with,” he says. “This is a country of small towns, right? Let’s face, even Toronto. I think that the Trailer Park Boys, everybody knows someone like them.”

This story was originally published June 28, 2004 via Chart Communications.