Peter Murphy: ‘Pissing’ on His Ex-Bauhaus Bandmates, Slaying in ‘Twilight’ 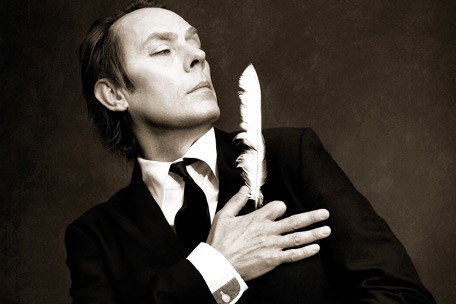 Peter Murphy may be the “Godfather of Goth” and the lead singer for one of rock’s spookiest bands, Bauhaus, but until recently the 54-year-old Brit seemed indifferent to his black crown.

Murphy’s 1990s and 2000s were marked by the creation of a traditional Turkish album, an ambient electric album, a conversion to Islam and a subsequent move to Turkey. It almost felt as though the man who had freaked everyone out so thoroughly performing ‘Bela Lugosi’s Dead’ in David Bowie’s chilling 1983 vampire flick The Hunger had left Nosferatu behind.

Then a strange thing happened. In 2006, Bauhaus reunited and toured with Nine Inch Nails. In 2008, they put out Go Away White, their first proper album in 25 years (though they disbanded again before touring the effort). In 2010, Murphy was introduced to a new generation of dark-seekers via a cameo role as “The Cold One” in The Twilight Saga: Eclipse. And now, armed with a bristling return-to-rock solo record called Ninth and a long-awaited willingness to play Bauhaus songs during his solo sets, it seems like Murphy has returned to claim his dark throne.

The two solo singles, ‘Seesaw Sway’ and ‘I Spit Roses,’ seem like a coda and that you’re sending a message to someone. Are those songs specifically about Bauhaus?

No, not at all. There is that energy in there, in that I was so exhausted in trying to get all the other members into being what [Bauhaus] was all about, and not to bring old baggage of Love and Rockets and their L.A. experience, poor things, [into the reunion].

But when I tried to kick-start [Bauhaus] again in ’98, it was obvious the “US vs. Him” thing hit again and it was like, “Am I stupid or are they stupid?” In 2005 I advocated for it in a very rational way, and a very artistic way, too. But it’s very emotional, and what I didn’t consider was the other three had been together since Bauhaus for 13 years in Love and Rockets, and there’s a whole agenda there that I wasn’t aware of.

Of course, they’ve split thousands of times. They split all the time for similar reasons that we did. They became exhausted with each other, I’m sure, jaded with each other. The three of them, poor things, there was all this stuff going on all the time. I didn’t care about it, I didn’t want to know, so I had to work on wiping that away, plug in and shut up. It worked, but then I realized “What am I doing this for?” I don’t need to.

Is that why you’ve said you’ll never do Bauhaus again?

I was like, “I don’t need this. It’s me who’s driving this. Why am I expending this emotional energy? Why?” I had problems because you want something so much but then [Bauhaus member] Danny Ash and I have very similar antipathy to the Bauhaus collection of individuals, and all that would start to come up again. So there were some issues that we didn’t agree with.

So I think one day Danny Ash and I can make a great album together — ’cause we’re the heart of it in a way. So Ninth was like, “Yeah, OK, I’m doing this. Fine. And I know how to do this.” So it wasn’t kicking against that band, it was “This is who I am.” Pissing on the territory. And also pissing on them saying, “Get this, this is what you had, I’m gone.” But it’s not angry at all.

I owned that. That’s my part. Totally slayed. [Eclipse director] David Slade was a massive early-Bauhaus fan, a teenager up in Nottingham, and now he’s doing this and he was brought in to add a hard edge to it. His own previous [film] project was called Hard Candy and it was pretty brilliant, and he approached me with that kind of intelligence, that angle to it. And it wasn’t just some cameo, I was playing me, in a way.

Of course, playing Cold One’s a caricature because it’s a bookend to The Hunger in a way. And it’s the most cliche label that I’ve got, so alright, I did it, I am that. I can be that because I am an actor. My music goes everywhere. So when I do Bela, I am that. I freak people out with that because I become terrifying. And then I go over to [Bauhaus song] ‘Hollow Hills’ and then I become this other thing. Whatever. And that’s kind of what I’m like, I’m kind of a raw bastard, a raw actor. But it’s me. It’s not other characters that I play somehow.

What’s interesting is that you’re willfully embracing this dark stereotype. Andrew Eldritch of the Sisters of Mercy would go around claiming his band wasn’t goth. It felt like he was betraying the people who supported him. Now you’re doing the opposite.

They really started goth. Them, The Mission, Alien Sex Fiend, all that lot. They came after us and there was The Bat Cave [nightclub] and all that. And we’d laugh at it — they were our audience, y’know what I mean? They were our fans, like, we saw ’em on this TV show, we had just split, and there was all these uplights, but no movement, just mumbling all the way through, and it’s just like, “Oh no, that’s so bad.” But it got big — that’s goth.

We’re not goth. That’s goth. But I understand how we sparked that. I don’t deny it, but sorry, yes-but-no, you know what I mean? I am an icon in that sense, so I play with that. That’s actually quite living art in a way. It’s very Warholian.

So you don’t really “live goth” so much as “play goth.” Have you ever read any of Stephenie Meyer’s Twilight books?

Noooo, no. You know what I’m talking about, don’t you? I was into art house cinema back in the ’80s. I was going to all of them, like [Pier Paolo] Pasolini, and it was in London and you’d go to the ICA and see performance art and it was just as much what I was doing as anything in my head. So it was like that’s my rock ‘n’ roll, ’cause I’m not in rock’ n’ roll, I never was. That’s why we were hated in England in the press. Because we did things that were not allowed. You don’t cover Bowie. That’s sacrosanct. And do it better. And be Ziggy Stardust. They didn’t get that. No one did that.

But the one who did it — us — did it better because it was a fan record, we were Bowie casualties and we expressed that and I became Ziggy onstage. It was very interesting and very powerful, but we were really on it.

But we were a million miles away from The Bat Cave. That was like a joke. But that’s the spawn of the goth crowd, that lot, and now we get billed up “Alien Sex Fiend, Bauhaus…” it’s a joke. It’s like f— off. Joy Division and us? Yes. Bauhaus and The Doors? Yes. We were the new Doors. The Doors of the ’80s. Totally.
There are a ton of new “dark” bands coming up.

There are a ton of new “dark” bands coming up. From dark rave to artists like Austra and Dum Dum Girls and the like. Do you pay much attention to what’s happening?

There’s always new. You just have to be yourself. I was never really plugged in, and that’s the point, you don’t have to worry about the exterior and magical form. Luckily, that’s what I was taught. We created it all in a vacuum, but that’s just how it happens. So I don’t really have to worry about keeping up, because what I do, nobody can do. So I still make this without any real ideas; I don’t know how it happens. But it really does work, people recognize that when it’s there. That’s a great feedback. Because then when people say it doesn’t, you go, “OK. Goodbye.”

This story was originally published November 30, 2011 on Spinner Canada.