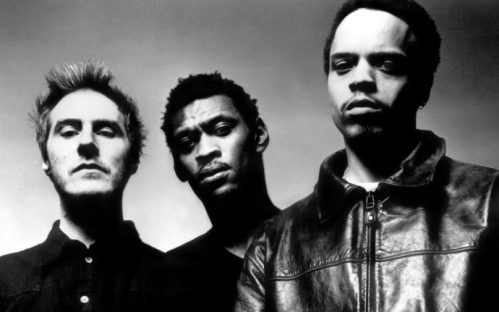 Look over your shoulder, keep your eye on your neighbour, trust no one: These are sentiments usually reserrved for paranormal-hunting government agents, not rock stars, but the leery eye has afflicted Massive Attack, too. Mezzanine, the Bristol trip-hop trio’s new album, is more spycatchers’ guide to self-help than bass-bin beach party.

“Being in a band is quite schizophrenic, really,” says 3D. “We spend a lot of time away from home and when we get back we don’t relate to people necessarily.” He’s unshaven and looks as though he could have authored numerous conspiracy theories, rather than dub-infected pop songs. “These things do lead to a bit of insecurity and paranoia and that’s reflected in the music.”

You wouldn’t think a group as important as Massive Attack would need to be a wary lot. Three albums in (Blue Lines ’91, Protection ’94, Mezzanine ’98), the aforementioned 3D, Daddy G and Mushroom are pretty well-established these days. They work with Madonna; get to pick and choose who they’ll remix; and the band have become both a popular pick and a critical fave. If you trace Massive’s roots back to its genesis hanging in Nelle Hooper’s crew, it’s not a great stretch to suggest that the Attack is single-handedly responsible for creating the trip-hop genre.

However, a quick listen to the dark “Group 4” from Mezzanine suggests they’re still more trench coat than top hat. Lyrical snippets: “While TV cameras monitor me” and “I train myself in martial arts” don’t exactly ring out peace, love and positive vibes. Throw in the equally sinister “Angel” and the reptilian “Inertia Creeps” and there’s little doubt the band is looking over its collective shoulder.

“With us it’s just based on themes in our lives — our relationships.”

From that, one could gather Bristol is some James Bond-ian swing town where rock stars double as covert ops in crazy world domination schemes. Sadly, it’s far less glamourous. Mushroom suggests: “A quick night in Bristol. You probably come down there. Go to the pub. Then go home,” he says, laughing.

“People think Bristol is a marketplace town like Seattle,” Mushroom continues. “You walk down the street and see Portishead hanging on one corner and we’d be on another and Roni Size’d be on the next. It’s all really just people staying in. It’s a really boring town, actually.”

If Bristol is so boring, then the wariness so palpable in songs like the rolling-thunder “Risingson” must come from somewhere else.

Perhaps somewhere even closer to home — in their heads. The next three hypothetical scenarios give weight to this theory by showing Massive Attack even exhibit hints of suspicion in their humour.

Who would win a battle royale between Madonna, Goldie, Tricky and The Artist Formerly Known As Prince?

3D pipes in immediately: “Madonna’s the richest, so she’d probably hire some serious assassins. She’d make the phone call and that would be it — done.” Then, with more introspection — but also with more secret knowledge implied, Mushroom adds, “You wouldn’t be able to find Goldie because he’d know it would be coming up, and he’d just run out the back door and sic pit bulls on ’em.”

If six death-metallers with swords and two rappers with Glocks are 10 feet apart, then start to fight, who’ll win? “Glocks are going to win against swords every time man,” says 3D. “Yeah,” adds Mushroom.” You don’t miss with someone with a sword coming at you.”

If everyone smoked a big joint simultaneously would it mean a massive shortage of junk food an hour later? “I think there would be riots,” says 3D.

Riots, pit bulls, sleazy short guys with gold teeth? It screams out “vivid imagination,” but check the Horace Andy-sung “Man Next Door” and you’ll know Massive Attack truly believe in these type of characters and scenarios, and always have.

Indeed, even the band agrees. As 3D says, “We’re pretty much the same place [as that]. The same level, the same mentality.”

This feature originally appeared in the May 1998 issue of Chart Magazine.