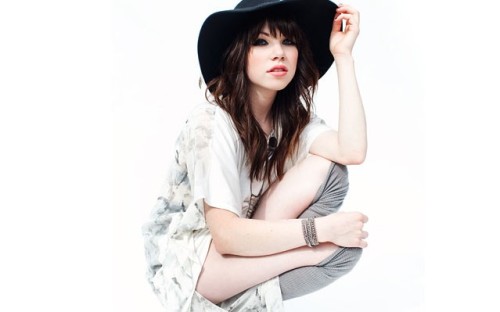 Two months ago, Carly Rae Jepsen got a panicked call from her sister. “She was hysterically screaming into the phone ‘Justin Bieber just tweeted about your song!'” Jepsen tells AOL Music Blog. “I was like ‘What? Really? No way!’ And then I went to check it out and, in fact, he had.”

The pop idol had heard Jepsen’s insanely catchy new single “Call Me Maybe” on the radio and instantly fallen under its spell. Soon, both the Biebs and his lady friend Selena Gomez were both tweeting about their love for the song, gaining the Juno nominee and Canadian Idol alumus (she placed third in the show’s fifth season) instant international attention.

And that was only the start of Carly Rae’s whirlwind ride to almost overnight pop stardom.

“Not too long after that, we were informed by my label, 604, that [Justin] and his manager [Scooter Braun] had actually approached them and asked if we’d be interested in combining forces and spreading the music outside of Canada.”

Jepsen and her team were definitely interested, so she flew out to Los Angeles to meet with the pair and wound up signing with Braun and his Schoolboy Records label.

The ink was barely dry on the contracts before Jepsen discovered that her new label mate had another surprise in store for her. Back at home, she went on Facebook and watched a video she’d recently been tagged in. She thought the video, which featured a bunch of mustachioed fans dancing around and goofing off to “Call Me Maybe” was cute, but she didn’t really realize what was going on at first.

That video — which also features the likes of High School Musical/Hellcats star Ashley Tisdale and members of Big Time Rush — became a viral sensation, garnering over 20 million views on YouTube and rocketing “Call Me Maybe” to the top of the digital charts, the first song by a Canadian artist to do so since her new buddy Bieber accomplished it with “Baby” in 2010.

“It felt like a really welcoming gesture,” Jepsen says of the video. “We had just signed the documents not a day or two before and then they posted the video and I kind of realized how sincere they were about helping me.”

To thank him for the video tribute, Jepsen made a last-minute appearance at Justin’s 18th birthday party. “It was kind of something that was thrown my way at the last minute. Through the first verse, I’m not really aware that I’m there! And, like, halfway through the song I start to sing,” she admits. “It was a terrifying and exciting experience to be spontaneously thrown into!”

She’s also working on a duet with Bieber. “The first day I met him, he invited me to join in on a song that he had in mind for me, and we mapped it out that night. I was pleasantly surprised with just how passionate he is as a musician and how much I loved the song!” Jepsen enthuses. “I can’t even begin to explain how talented that guy is.”

She isn’t sure exactly when their track will be released, but the singer hopes it’s soon. “If I had my way, it would be out today! Yesterday!” she exclaims. “I can’t wait to share that one.”

In the meantime, she’s already back in the studio with her friend and “Call Me Maybe” co-writer Josh Ramsay of Mariana’s Trench fame, working on new pop-oriented material that she hopes will expand on the sound she discovered with her hit single. Even though her current album, Curiosity, just came out, she expects to have a new album ready for release by September. Then she’ll start planning a proper tour.

And somewhere, in all of this craziness, she might actually find a couple of minutes to catch her breath and enjoy the ride.

“There’s moments on plane rides where I’ll sit for a second and just take it all in. I’ll be looking at the clouds, thinking, ‘Life is nuts. This is so insane. I’m flying to Texas right now. I’m flying to L.A.!’ This is not something I thought would ever really be happening for me. So there’s definitely moments where I sit there and I can just feel overcome with gratitude.”

This story originally appeared May 12, 2012 on AOL Music Blog.