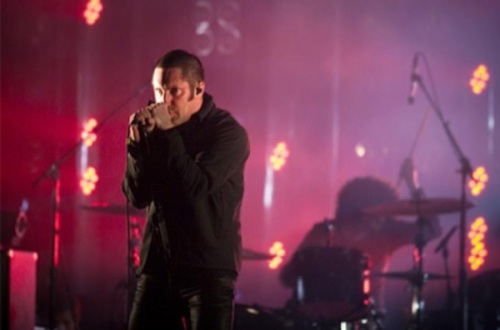 Trent Reznor made like Clint Eastwood on Sunday, riding into Toronto to save Virgin Festival Ontario and then presumably to vanish and possibly never be heard from again.

Although Reznor and his Nine Inch Nails posse didn’t exactly paint the Molson Amphitheatre red and change its name to Hell like Eastwood did in High Plains Drifter, they certainly salvaged the festival in their own special way.

The two day festival had been much-maligned for its last minute move from the camping destination of Burl’s Creek near Orillia, Ont. to downtown Toronto and its uneven and lightly attended first day headlined by Ben Harper & Relentless7.

The crowds were also sparse most of the day on Sunday until they swelled remarkably to about 80 per cent capacity by the start of Nine Inch Nails‘ set.

Those that made it to the show were treated to an amazing trip deep into NIN’s back catalogue. “Somewhat Damaged,” a pounding “Terrible Lie” and searing “Discipline” started the set. Somewhere in there, Reznor destroyed a guitar and prompted a roadie into a lengthy on stage cameo to repair collateral damage to a keyboard.

If this was to be the “Wave Goodbye” tour that Reznor had been suggesting, it was clear the band were going to go out all guns blazing.

“March Of The Pigs,” “Closer” and “Gave Up” were all delivered with ruthless intensity and all the spit and bile that has made Reznor the angst icon he is.

It wasn’t until the tempo changed between some atmospheric pieces from The Downward Spiral that Reznor dropped the hate machine veil, saying “Thank you so much for the support over the years. It means so much to us.”

Reznor would say little else all night. He stopped to apologize after “Wish” to explain that he was sick and was losing his voice, but concluded his confession with a “fuck it” before barreling into “Suck” and signature Joy Division cover “Dead Souls.”

“Hurt” felt a little on the obligatory side, but the closing one-two of “The Hand That Feeds” and “Head Like A Hole” were a furious way to go out. There was no encore, just a short “thank you” and Reznor walking off stage into the night and that was perhaps the best way it could have ended.

For those who actually showed up before Nine Inch Nails played the VFest lineup yielded many musical rewards.

Pet Shop Boys‘ classic electro disco was fascinating. Their brightly coloured extravaganza was definitely the biggest multimedia event of the fest. It would be tough to accurately describe the swirling, dancing and flashing that went on, but it might be close to say it’s what would happen if Tron collided with a gigantic gay rainbow.

Many of PSB’s long-time classics like “Suburbia,” “Always On My Mind” and “Domino Dancing” were reworked perhaps to their detriment, but a cover of Coldplay’s “Viva La Vida” — complete with Neil Tennant in a kingly robe — exceeded the original and their top hit “West End Girls” positively boomed to close out their set.

The Boardwalk “Stage,” which was essentially a merch tent with some speakers and gear set up in it and a giant lamp post obstructing the view, showcased some solid artistry all day.

The D’Urbervilles would fare better with their bristling dance/punk/hardcore/whateverthekidsarecallingit. Their attack was relentless and frontman John O’Regan — who looks like androgynous singer Phranc — was a positively magnetic presence.

The Von Bondies would play next and they ripped. Their set was all loud and fast and it was a perfect shot of adrenaline. It was also the first time VFesters started to shake at that hated lamp post in their way. I was hoping for them to topple it in a fit of collective vandalism, but it never happened.

Back when Jack White was beating on Jason Stollsteimer, it became kinda gauche to like the The VBs mostly because King Jack said so. But as they fired through song after song of wicked garagey punk rock ‘n’ roll, it dawned on me that the Bondies shouldn’t be discounted so easily.

The way I see it, they’re pretty much staying true to their vision. Meanwhile, White is hopping around every which way trying to find himself, all the while fighting a mini-war against consumers via his “authentic” record label. Twenty years from now one of these acts is going to end up like Eric Clapton and the other like The Ramones… and I know which’ll be cooler.

By the time Plants And Animals played, they had solved the obstructed view dilemma. They simply set up in the middle of the crowd — a huge leap out of the box for a festival of this nature. Their Parc Avenue tracks seemed more rocked up for the fest crowd, which showed another nod towards adaptability as well. I was amongst those restlessly waiting for NIN at this point, too, but they deserved high marks for innovation.

Some of the acts on the Virgin Mobile main stage didn’t fare so well. We joke about it, but play “Superman’s Dead” in front of thousands of Canadians and that “why-ee-I-ee-I-I” makes complete and total sense. Still, as familiar as Our Lady Peace‘s many singles were, their slower moments were sending the audience scurrying to the beer vendors.

N.E.R.D. were interesting. Hands up if you knew they were a funk metal band? That was kinda weird. Same with the all shirtless surfer dude stage invasions. That was more weird.

And Sean Kingston? We felt bad for the guy, getting shuttered off to the wilderness of the Virgin Radio Stage, but he drew as many people as anyone on the Boardwalk Stage. And I’d prop him up any day if I had to choose between his charming pop singles and a return of Diddy.

In the end, though, it was all about Reznor. Everyone knew it, everyone was waiting for it and it was Nine Inch Nails who would end up making Virgin Festival Ontario.

This review was originally published August 31, 2009 via Chart Communications.