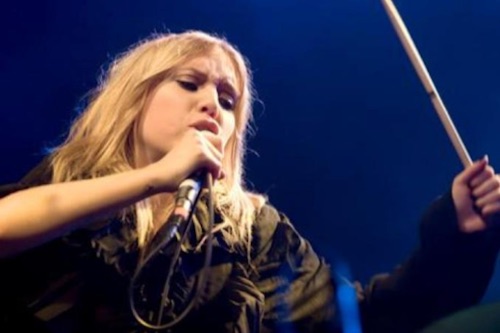 With all the gays and American Apparel leggings, it would have been easy to confuse the rammed Lykke Li show at Toronto’s Phoenix Concert Theatre with some hip West Queen West theme night, but the Swedish pop phenom’s show was often more (and less) than a primpin’ dance party.

The promise of dancing was there. Li started her set with a torqued-up version of “Dance, Dance, Dance” that immediately got the all-ages crowd bouncing. Li, who looked the part of a wood nymph let loose in the city, was all spastic dance moves while she furiously beat a lone cymbal at centre stage.

Li only fueled the dance fire further by asking the crowd early on, “How many people like to dance? Raise their hands.”

The problem with all this dance talk is that in the cold, hard truth of it, Li’s music isn’t all that danceable. It’s sort of like trying to make a mosh pit while listening to a Sugarcubes record. There are clearly danceable moments when one takes in Li’s Youth Novels breakthrough album, but it’s definitely not defined by the boogie as much as it flirts with it in the midst of a sonic adventure.

By the time Li got to “Hanging High” — complete with the rather thunderous double-drumming cameo from openers Wildbirds & Peacedrums — the Toronto audience had settled into a polite collective sway and most hopes of a real dance party were gone.

The Sugarcubes mention isn’t by accident either. Whether it was the strange boa/scarf thing that Li wore that made her boobs look like they threw up leaves, or her occasionally inhuman vocal bleats and wails, Bjork is about the only truly appropriate touchstone by which to compare Li.

It’s fitting, then, that the night’s most magical moment came when Li performed a massive take on “Complaint Department.” Li’s signature song punished in the same way that Bjork perfectly amalgamated pristine vocals and stomping industrial beats on “Army Of Me” almost 15 years ago. She began the song alone on stage and sang to backing programming while she threw herself about.

It appeared this was going to be a Peaches-like solo effort until the song broke down and her entire band reappeared to blast towards the conclusion. The much hoped-for dance party was finally here, but it seemed like the audience was paralyzed by the fact that the dance party they were getting was more Nitzer Ebb than Katy Perry.

The electric circus fizzled out only a short time later when Li entered into the stretch-the-set-out phase of the evening by covering Kings Of Leon’s “Knocked Up.” The song’s by no means a winner to begin with, and Li’s rendition did nothing to make it one.

At least that misstep was more than made up for by the closeout of the proper set with a vibrant take on the megaphone-enhanced “Breaking It Up.”

It was then on to the encore portion of the show, and with it came an intriguing glimpse of what might become of Li. She came on stage alone to do a couple of a capella verses of what I believe was Little Anthony And The Imperials’ “Tears On My Pillow” before she stopped and asked the crowd whether anyone knew what she was singing. Having decided that no one did, she launched into her best song, “Tonight.”

The ballad was what everyone was there to hear, but it definitely did nothing to end the night on a dance-y note, which may have been why Li decided to jar everyone out of slow song mode with what appeared to be a cover of A Tribe Called Quest’s Lou Reed-cribbing rap song, “Can I Kick It.”

That Li took the audience on an adventure that included Lou Reed, rapping, Kings Of Leon, industrial dance stomping, old-time crooning and copious Bjork-isms means she’s going to be capable of pretty much anything she puts her mind to in the future. It probably won’t be a dance party, though.

This review was originally published February 9, 2009 via Chart Communications.