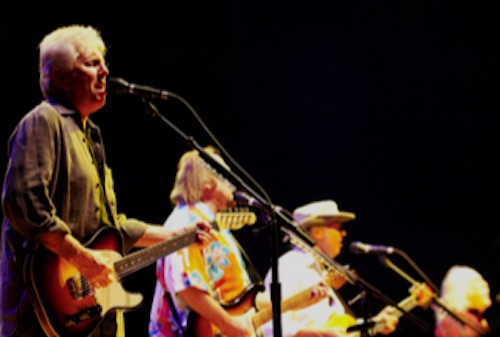 Named the “Freedom Of Speech” tour and featuring Neil Young playing most of his anti-Bush album, Living With War, the current Crosby, Stills, Nash And Young jaunt seemed perfectly designed to reharness the counter-culture energy that made CSNY protest heroes almost four decades ago.

The big question, though, was whether would the audience turn on and tune in or drop out. The early odds were even. Sure there were pockets of young rascals and sweet familial pairs (a father with tangled hair and teenage daughter dressed in burlap — how noble it is to keep Greenpeace supplied with volunteers), but the bulk of the audience was comprised of middle to upper-middle class, well-heeled white people. Your dad, wearing a casual golf shirt, was there. So was William, the assistant director and his well-pilatesized second wife, Audrey.

The key factor in all of this is that these people — the comfortable charity gala lefties — were the ones who would really have to dig the messages CSNY were putting out if the show was to have any success. No offense to the dudes up in the cheap seats, but you’re not the fellas that can affect real change. At least not yet.

The show kicked off with Young’s “Flags Of Freedom,” complete with a backdrop of rotating Canadian, British, American and associated allied flags. It was well received, although it’s hard not to rile up a crowd with the cheap pop of flag waving. The remainder of the 13-song first set rotated fairly evenly between Living With War numbers (“The Restless Consumer,” “Shock And Awe,” “After The Garden”) and tracks from CSNY’s various permutations (“Wooden Ships,” “Military Madness,” “Immigration Man”). Tom Bray’s trumpet work on Young songs, and throughout the evening, added a consistently solid punch, but the rants against Bush (David Crosby referred to him as a “chimpanzee” at one point) and song-form shots at bureaucracy and consumerism seemed to fall on relatively disinterested, if not deaf, ears.

The 20-minute intermission before the second set allowed CSNY to recharge. The piano double shot of the Graham Nash-featured “Our House” and Young’s “Only Love Can Break Your Heart” roused the crowd with some much-needed hit power. Sure, they’re love songs, not rebel songs, but they at least got the crowd moving.

The rise in temperature in the audience also buoyed Stephen Stills’ romancing-the-crime song, “Treetop Flyer.” With snap-of-finger suddenness, it brought the wobbling Stills to life. Until then, it had been mostly Young showing any spikes of emotion, but now half of CSNY seemed dialed in.

Stills’ next move, “Southern Cross,” brought the full band, four astride (no wandering by Nash and no rooted disinterest from Crosby), to full attention. From here on out, the quartet rolled out the protest that they had flirted with aggressively all night. “For What It’s Worth” was awkward, but Young’s blunt “Let’s Impeach The President,” complete with a video monitor that flashed mugshots of dead soldiers, brought it all back home. The payoff that would follow was a truly fiery “Ohio.”

It may have taken CSNY ’til the two-and-a-half-hour mark, but there it was. That combustible hippie righteousness had finally flickered, fanned and burst. The crowd, tepid for much of the night, was singing, clapping and in some pockets, downright flailing (eighth row, centre, floors — dude, I saw that usher trying to bum your trip all night).

I must say, even my jaded rock critic soul experienced suspension of disbelief when the band then hurdled into “Rockin’ In The Free World.” That five minutes of sloganeering was followed by a brusk run through “Woodstock” and then it was done. In the end, there were about 20 minutes total in the nearly three-hour set where pure, unadulterated fight-the-power-ness actually broke through to the crowd. In the mathematics of rebellion, Toronto ultimately had little screw-the-man vigor in its heart.

It wasn’t a complete loss, though. There’s a causeway that connects the ACC to Union Station that features an array of fancy display automobiles. Walking past them after the show, I noticed someone had besmirched one of the SUVs with a Greenpeace bumper sticker. It was surely the work of one of those burlap-wearing teenage girls and not one of the Eddie Bauer golf dads, but it was at least something. Perhaps it’s really about the small victories. If that’s the case, consider Toronto a win.

This story was originally published July 11, 2006 via Chart Communications.