As a bit of a pipe-banging, keyboard-smashing trip down memory lane, here are some bullets about Pretty Hate Machine:

* An old MacIntosh Plus computer was one of the key instruments in creating Pretty Hate Machine.

“I made Pretty Hate Machine using a Mac Plus, an Emax keyboard and a Mini Moog,” Reznor told Apple in 2000. “I’ve just always had a soft spot in my heart for Macs.” 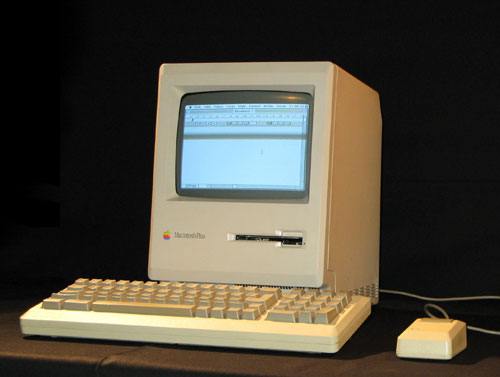 * Super-producer Flood contributed “programming, production and engineering” to the album. During this time period he also worked on Depeche Mode’s Violator as well as albums by U2, Nick Cave, The Charlatans and Pop Will Eat Itself.

* Richard Patrick from Filter was credited with playing “drone guitar” at the end of “Sanctified.” Clearly this was his creative peak.

* As evidenced in the “Head Like A Hole” video, in the early days NIN roadies were not good at protecting Reznor from tripping hazards.

* Lady Gaga’s been trying to copy the “Sin” video for the last three years.

* The song “Ringfinger” samples “Had A Dad” by Jane’s Addiction and  “Alphabet St.” by Prince. Jesus And Mary Chain would also cover “Alphabet St.”

* Back in the early ’90s you separated the tourists from the committed by whether or not they knew about this Queen cover.

* Reznor’s Jesus Christ pose in the “Down In It” video predates Soundgarden’s similarly named song by two years.

* NIN toured with Guns ‘N Roses on their first album. Whenever Reznor tells stories about that period it’s gold:

“So we open up. First song, people are, like, ‘Yeah, there’s a band onstage,’ and they’re slowly realizing we’re not Skid Row. Second song, ‘Okay, these guys are not Skid Row and I think I hear a synthesizer.’ Third song, ‘We definitely hear a synthesizer — this is bullshit. These guys suck, they’re faggots, let’s kick their ass.’ There is something about the feeling of standing in front of 65,000 people giving you the finger … An intense terror took over. In a word, it sucks.”

* Danceability of the songs on Pretty Hate Machine, ranked: