Chris Isaak Slams Bands With Bad Singers: ‘It’s Like a Team Without a Good Pitcher’ 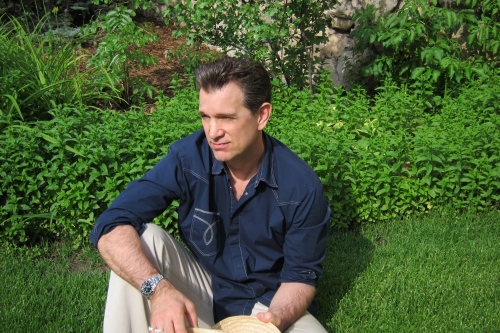 Chris Isaak has some advice for youngsters looking to play that old-time rock ‘n’ roll — you’d better know how to sing.

“A lot of bands don’t have a good singer,” says the 55-year-old crooner behind such hits as ‘Wicked Game’ and ‘Baby Did a Bad, Bad Thing.’

“It’s like a team without a good pitcher or quarterback. He’s going to be involved in a lot. If he’s not good, if you don’t have a singer who’s convincing and powerful and has a lot of range, then a lot of this stuff falls by the wayside. You can only do ‘Yeah, baby, yeah!’ because when you try to do a ballad your singer can’t sing ballads. Elvis did ballads. Jerry Lee Lewis could do ballads. Carl Perkins could do ballads as well as rock. So the original guys really had a lot of range.”

The “original guys” would be at the top of Isaak’s mind these days because he’s just released Beyond the Sun, a 14-track album of him covering classic rock ‘n’ roll and country songs by the likes of Presley, Lewis and Perkins as well as Roy Orbison and Johnny Cash. Isaak recorded the songs at the original Sun Studio in Memphis, Tennessee, where most of these musical pillars got their start.

Interest in these original rock ‘n’ roll pioneers is quite possibly at its highest point since the Stray Cats strutted and Huey Lewis and the News kept the heart of rock ‘n’ roll beating back in the ’80s. There’s the Black Keys holding down the jean jacket blues rock, Bruno Mars’ pompadour dancing away on the pop end, Imelda May standing up for the rockabilly chicks and the likes of King Khan, Dirty Beaches and Hanni El Khatib making noise out there on the college rock fringes.

Two separate tribute albums, Listen to Me Buddy Holly and Rave on Buddy Holly, have attracted Cobra Starship, Patrick Stump and Zooey Deschanel, and Julian Casablancas, Modest Mouse and Florence and the Machine, respectively, to cover the icon’s songs.

Meanwhile, the likes of Feist, Metric’s Emily Haines and Rilo Kiley’s Jenny Lewis can be seen bopping along to Chubby Checker and the Isley Brothers at hipster events such as Toronto’s Goin’ Steady monthly ’50s and ’60s dance party.

Isaak’s excited about prospect of young people finding out more about the music that he loves so much.

“What I’m hoping is there are a bunch of people out there who are 25 who’ve heard some of these songs on Beyond the Sun and don’t really have a picture of what the whole thing is, having them go, ‘This is good. Now I want to hear the original guys.'”

Still, Isaak wants the next generation to warm up to this music without it being just be an exercise in nostalgia.

“I love that people have different interpretations of it,” says Isaak. “And I love that they dig the music and they do cool things with it. Me personally, and it’s not a judgment about what other people do, but a lot of times when I hear a rockabilly band and they do ‘weelll, tick-a-tunk, tick- a-tunk,’ next song, ‘weelll, tick-a-tunk, tick-a-tunk,’ and if they’re just nostalgia-based, if it’s ‘Weelll, I’m going with Mary Lou/In my pink Cadillac/We’re goin’ to the hop…’ I go, ‘This is just about another time.’

“It’s not about nostalgia to me.”