The Connection Between ‘Greetings From Tim Buckley’ And Thrash Metallers Anthrax 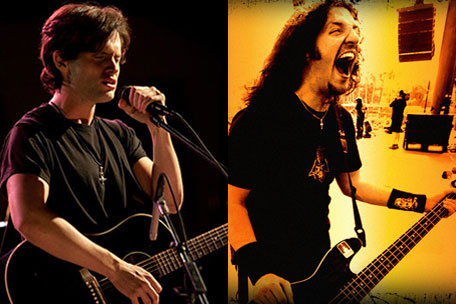 Penn Bagdley as Jeff Buckley and Frank Bello being metal

Anthrax bassist Frank Bello’s appearance at the Toronto International Film Festival is going to be a whirlwind. He’ll be flying in on Sunday morning, attending the world premiere of Greetings From Tim Buckley, his feature film debut where he plays the role of punk icon Richard Hell, and then he’s right back on the road in support of Anthrax’s latest album, Worship Music.

“I’m not a downtime kind of guy,” Bello tells Spinner. “I get nuts when I’m home too long.”

It’s also appropriate, given that the making of Greetings, a film about the late Jeff Buckley’s life- changing performance at a 1991 tribute show for his father Tim Buckley, was also a pretty wild and fast-paced adventure. The theatrically-trained Bello auditioned for the Richard Hell role, who also performed at that concert, on a Thursday and got the role the very next day. By the following Monday he was on set.

With no time to spare, the thrash metal pioneer set out to learn as much as possible about Hell.

“Thankfully, the internet exists,” Bello says with a laugh. “I read up on Richard Hell. I did everything I possible could.”

He also discovered that some of the film’s crew members had worked with Richard on the original concert and talked to them at length about the experience.

“I asked them about all of his personality traits, little quirks and things you wouldn’t think to ask, but I just wanted to know how he reacted to certain things, and music,” he explains. “They had a lot of great stories.”

In the midst of all of Bello’s research and filming — not to mention teaching himself to sing in French so that he could perform Tim Buckley’s “Moulin Rouge” — he had to steal away from the set to play the biggest show of Anthrax’s career: a Yankee Stadium concert with Metallica, Megadeth and Slayer as part of the Big Four tour.

Bello had a major scene to film the next morning, but the crew were willing to accommodate him. At least a little bit.

“The people from Buckley rule. They knew that I had to play Yankee Stadium, so they took pity on me. They didn’t give me a 6 a.m. call time, they gave me a 7:30 a.m. call time! That night at Yankee Stadium, though, it’s the biggest show we’ve ever done. There’s a party after and you have to go to the party, be cordial, and all of that stuff. So I’m at the Metallica party after the show and all of the bands are hanging out, everybody’s talking and all of a sudden I get a tap on my shoulder and it’s my manager telling me ‘Frank. It’s 3 a.m. You have a 7:30 set call.’ And I just looked at him with big eyes. It went that fast.”

Getting up that same morning wasn’t the best experience.

“Let’s be honest, I had a couple of beers. I wasn’t drunk, but I celebrated a little bit and then I had two hours of sleep and I went right to set.”

Bello and the Buckley crew made it all work in the end, though. There was even a cot waiting for him between takes.

Greetings From Tim Buckley isn’t the only film about tragic cult hero Jeff Buckley that’s set to come out in the next while. Another film, which features Jeff’s mom, Mary Guilbert as an executive producer, is also in the works. Unlike Greetings, which focuses on Tim Buckley’s songs, the other film, tentatively called Mystery White Boy, has exclusive rights to the use of the younger Buckley’s music and the blessing of his family.

Bello is aware of the controversy surrounding the two films, but he stands by Greetings, both as a member of the cast and as a Buckley fan.

“This is a great story,” he says. “If I wasn’t in the film, I would want to see it. I’m a Jeff Buckley fan and I want to see the journey he took and, let’s face it, this really did start him off in his career.

“I don’t know what their story is [Mystery White Boy]. I know it has a lot of his songs in it. But this is a different kind of story. It gets you to where he started his career and that’s really interesting.”

Perhaps most importantly to the musician, though, Greetings From Tim Buckley cast a Jeff Buckley who could pull off the musical side of the role in Penn Badgley. The actor, best known as Dan “Lonely Boy” Humphrey on Gossip Girl inspired some raised eyebrows and doubt when he landed the role, but Bello wants to everyone to know that Badgley is for real.

“Penn kicked ass. I was so proud of him, man,” he enthuses. “This kid can sing. So I think that people will see that he’s actually got the chops, and this is from a music guy saying this.”

This interview was originally published September 12, 2012 via AOL Spinner