Carrie Underwood: Country Star’s Grunge Rock And Hair Metal Past — ‘I Was All About Pearl Jam’ 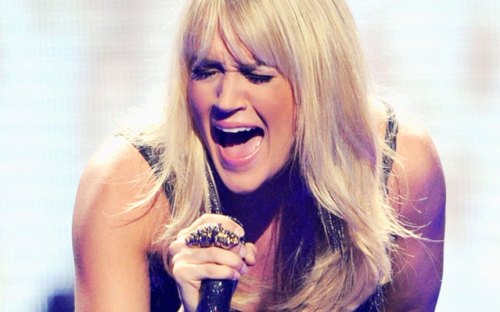 These days, Carrie Underwood is known for her trademark hotpants and her sunny, good old country girl demeanor, but there was a time back in the ’90s when the American Idol-winning singer was far more likely to be found in grunge rock-approved plaid shirts — and be mistaken for a ruffian.

“You know those stupid school pictures that you’d always forget about until you got there?” Underwood confesses to AOL Music Blog. “I wore those wide-legged jeans, like skater wide-legged jeans and a black and white oversized plaid shirt. And I remember when I got my picture back, one of my friends saying I looked like I was going to go rob somebody. Like I was a menace!”

Underwood’s not-so-secret grunge past goes a lot deeper than the collection of plaid shirts she still keeps in her closet. As it turns out, the Oklahoman was raised on rock ‘n’ roll.

“I grew up listening to ’80s glam hair metal. And then, when I got older in the ’90s, the whole grunge thing was huge and I was totally into it. I was all about Pearl Jam, all about Alice in Chains and Nirvana and all of that stuff.”

Now Underwood’s tastes run about as wide as her old skater jeans and, even though the recently released Blown Away is still very much a country album, she thinks it reflects the fact that she listens to a little bit of everything.

“I feel like now people don’t listen to one genre of music. They don’t listen to one specific kind of artist. My iPod is rannn-dom,” she says, practically stretching random into a four syllable word with her emphatic drawl. “I would guess everybody else’s is, too. It’s OK to listen to random things back to back, and I definitely feel like I’m influenced by that.”

At this point in her career, she says, she feels comfortable and confident enough in her abilities and tastes and follow her musical muse wherever it takes her.

“I feel like, with my fourth album, I can really do what I want,” says Underwood. “It’s not like I need to appeal to and appease this certain group of people. I want to go what feels good to me and what’s best for the song and for the album.”

In the case of Blown Away, doing what was best for the album meant going into the songwriting and song selection process with a completely open mind.

“I try not to put parameters on things when I’m writing or when I’m listening to things,” she says. “I don’t want to be like, ‘I need a big power ballad and that’s all I’m looking at!’ and ignoring everything else and potentially missing out on really great writing opportunities because I’m trying too hard to write one kind of song.”

She didn’t try too hard to force one type of vibe or feeling on the album as whole, either. Although Blown Away is already earning a reputation for being Underwood’s “dark” album, and it does take the singer through some previously unexplored territory filled with revenge and murder plots, the singer is quick to point out that there’s a lot more to it than unrelenting morbidity.

“We definitely take some of the songs in a darker direction,” says Underwood. “That said, I also have light, happy songs and have songs that are more traditional country than I’ve ever done before, so we kind of take the album in a lot of different directions.”

Underwood hopes that people like her musical and emotional hybrid, (“If there’s nobody out there to hear my music, does it really matter that I’m making it?” she muses) but also displays a bit of that old school picture day attitude when it comes to Blown Away‘s critical and commercial success.

“It could totally backfire,” she shrugs. “But at least I’ve done something that I really want to do.”

This story originally appeared May 24, 2012 on AOL Music Blog.